The news from South Africa is that Scotland are out of the Homeless World Cup. The valiant Scots suffered three narrow defeats all by the odd goal in their qualifying group. Sundays narrow 5-4 defeat by the Czech Republic was followed by a 3-2 defeat to France and a penalty shoot out against South Africa's B side.

The Scots won over many with their battling never say die spirit, in all their games they were never ahead but never gave up and battled all the way. They continue in the minor tournament and there are many trophies beyond the HWC itself up for grabs.

The event here in Cape Town has been a terrific success and as well as President Thabo Mbeki appearing on Sunday last, Dr Desmond Tutu will be present on Friday. The South African authorities are saying they see the tournament as a dress rehearsal for the FIFA World Cup due here in 2010. What a huge complement for the HWC organisers.

The final of the tournament is live on SABC on Saturday and the BBC Football Focus has a 10 minute piece being prepared for its UK show. The favourites to be in the finals all come from Eastern Europe with Russia and Poland both unbeaten after 6 games and both KAZAKHSTAN and Ukraine having lost just once each.

Away from the soccer world cup yesterday I went up Table Mountain in a cable car and what a wonderful view of Cape Province you get from up top. The mountain top is amazing. Not only is it flat and you can go for long secluded walks on its peak perfectly safely, but it has beautiful plants all over it as well as beautiful birds, lizards and other animals living in its micro climate.

Tomorrow I am being taken on a civic delegation to the altogether less safe environment of Khayelitsha Township, ONE OF THE BIGGEST AND MOST DANGEROUS IN South Africa, to see how the huge black population lives without running water or electricity. 50,000 people still use a bucket system of sanitation! It is apparently very dangerous for whites to visit.

Friday I hope to meet Archbishop Desmond Tutu. So I will send news of that then. As for now I am off to see if I can book a visit to Robbens Island where Mandela was imprisoned for 27 years - it is as you may imagine difficult to get seats on the boat out to it.

At the HWC its Russia vs Poland later today in the most eagerly awaited match of the tourney so far. The 3,500 seater stadium will be bursting at the seams.
Posted by Colin at 22:53 No comments:

It is an appropriate place to stage the tournament as it was here, 5 years ago, that the idea of hosting the event was first mooted by Scot Mel Young, then attending a conference of the international street newspaper conference as Editor of the Big Issue in Scotland.

Mel's vision grew and grew and after the initial successes in Austria, Gothenburg the tournament came Mel's home city of Edinburgh before arriving here in Cape Town.The tournament seeks to unite the homeless of the world via the universal language of football and raise awareness of this global inequity.
This year’s tournament was opened by President Thabo Mbeki and the first ball kicked by Africa's first totalling superstar the 1960's icon Eusebio of Benfica.

I was lucky enough to meet Eusebio this morning in our hotel foyer. He was instantly recognisable. Later I was astonished to meet EDINBURGH Provost Lesley Hinds who was attending in honour of last year's tournament hosts.
We watched Scotland’s opening match, a narrow 4-3 defeat to the Czech Republic.

Scotland were clearly upset by the failure of the tournament organisers to find the national anthem -Flower of Scotland- where they had to suffer a 5 minute indignity of being the only one of the 48 countries not to enter the magnificent 5000 seater stadium in the inimitable shadow of the world famous Table Mountain to the fanfare of their national song.

The seven strong Scots team of Francis Brodie, Laura Graham, Lindsay Cooper, James Shearer, Derek Spiers, Marc Steel and Liam Young were visibly upset by the shambles of first having no anthem and the then wrong one attributed to them.When the game itself finally got under way the Scots gave away three silly penalties for encroachment in the keepers red zone.

They did manage to save one and had a terrific Derek Spiers strike to cheer but were 2-1 down at halftime. Their second half performance was far better but even two more goals from Frank Brodie and a Spiers second could not make up for the early lapses in concentration as the young Scots went down bravely to a better organised Czech team.Better is expected from the Scots tomorrow in game two against France.

There is much to comment on at the end of the first days play, not least the need to constantly remind yourself that the impressive standards of footballing skills being exhibited are from homeless people across 48 countries. And at the end of day one the teams really catching the eye were England, South Africa, Portugal and Ireland.

My second report from the HOMELESS World Cup will follow tomorrow. I am off to bed to shake off the jet lag.
Posted by Colin at 22:54 No comments:

In March 2004 I visited Stornoway in the Western Isles where I addressed a full Council meeting on the issue of Road Equivalent Tariffs. RET is a policy which the SSP supports which would mean that island communities would not be penalised by the excessive costs of transporting goods. It seeks to ensure the cost of carrying goods by sea works out the same as it would by road.
The full Council meeting was a peculiar experience for me as it is conducted in Gaelic and thereafter translated into English.
Whilst at the Council meeting I spoke to Councillor Donald Manford from Barra. He asked me if I'd be prepared to lay down a question to the Transport Minister Tavish Scott upon my return to Parliament about the possibility of starting a new ferry route between Lochboisdale and Mallaig. I told him I had no objection but asked why he didn't ask the local member. He told me that he had done so repeatedly but the local Labour member Alastair Morrison had refused.
Upon my return to Edinburgh I duly laid the question. A couple of weeks later the minister replied to say it can’t be done; the tides didn't allow it and a new ferry and new crew would be necessary and so it was basically a non starter.
I copied the answer to Donald Manford, who, anticipating just such a reply got the South Uist Community Council on to the case.
They were able to show conclusively that the tides were fine and that the current ferry from Oban to Castlebay on Barra could easily include the Lochboisdale to Mallaig route without difficulty.
To cut a long story short they were able to convince the civil servants at the Transport Dept of the case and low and behold the Scottish Executive has now offered the route for tenders to come forward.
Councillor Manford was on radio and TV up in the Western Isles all last week celebrating and informing everyone that this success had originated with the question from a friendly MSP for the Lothians, Colin Fox of the Scottish Socialist Party.
Despite vain attempts by Alastair Morrison the Labour member to try and claim the credit the South Uist Community Council has invited me to join them on the maiden voyage sometime next year.
Posted by Colin at 12:11 No comments: 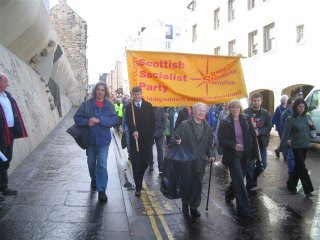 I am carrying the SSP banner on the CND long march for peace, as it reaches it's conclusion outside the Scottish Parliament, on Tuesday 19th September.
Posted by Colin at 16:58 No comments: