The Positive Case for Independence

Two friends of mine visiting Edinburgh from Burton on Trent recently told me they are frequently struck by just how different Scotland is compared to the rest of the UK. They felt the need to remind me we have our own bank notes, our own education system, our own legal system, our own newspapers, our own political parties, our own national identity and of course since 1999 our own Parliament. They might also have added Scotland also has free prescriptions, free care for the elderly, no tuition fees and that people here define ourselves as ‘Scottish’ not ‘British’. And by majority we continue to support social democratic values like public ownership, redistribution of wealth, nuclear disarmament and a modern democratic republic. Socially aware visitors are in little doubt Scotland is a separate country.

These differences are evidence that the national question is writ large in Scottish politics and has been for decades. Labour’s defeat in 2011 to parties on their right is in stark contrast to their 2012 rout in Scotland by a party to their left. The SNP are not socialists its true but then again neither are New Labour.

The SNP Government’s promise to hold a Referendum on Independence – now finally set for Autumn 2014 - was widely criticised within the Independence movement when initially proposed as ‘watering down’ earlier declarations that a majority in any Scottish election would itself be an irrevocable ‘mandate for Independence’. That majority was startlingly achieved 6 months ago and has ‘changed utterly’, as Yeats put it, the political face of Scotland.

David Cameron’s attempt to wrest control of the Independence Referendum was a reminder that the British state intends to fight ‘tooth and nail’ to prevent Scotland breaking away. They have made it repeatedly clear they believe Scottish Independence will weaken their power domestically and internationally and intend to conduct a ‘battle royal’ to prevent that from happening.

Scotland’s economy is dominated by the same multi-national corporations and finance capitalists found in the rest of the UK. Edinburgh is Europe’s 5th biggest financial centre. Multinational energy companies like Scottish Power and Scottish and Southern Electric, one Spanish owned, the other headquartered in Perth, are not keen on Independence. Nor are British Aerospace and Rolls Royce, the country’s biggest manufacturing corporations, heavily dependent on UK defence contracts. Oil giants BP, Shell, Exxon and Chevron own and control our lucrative North Sea industry and they will back Cameron too. The landed gentry are similarly opposed to Independence, as are the country’s wealthy lawyers, accountants, academics and businessmen.

So who, you might ask, is in favour of Independence? Support for Independence is noticeably stronger amongst the working class and young Scots. They see it as a route out of chronic child poverty, fuel poverty, pensioner poverty, housing squalor, institutionalised low pay, insufferable health and income inequalities and social conditions that have blighted working class life here for generations.

One illustration of the scale of those conditions emerged from the debate over pension rights when it was pointed out that life expectancy in the East End of Glasgow is just 55 years for a man. In other words, he will not live to see his pension such is the chronic poverty endemic in Scotland’s biggest city! These appalling social conditions are not of course unique to Scotland’ but they are without doubt a key factor behind support for Independence. Another is the prolonged ‘democratic deficit’ inherent in British politics which has failed to take account of Scotland’s revulsion at all these matters. Yet another is the widespread horror at British warmongering, its illegal wars and occupations, its nuclear weapons based on the Clyde and its position as the world’s fifth biggest arms manufacturer.

Working people are increasingly convinced they will be economically, socially, politically, and culturally better off if they were able to make our own decisions, spend our own money, deploy our own resources and determine our own destiny. Rather than be continuously forced to tag along with decisions we utterly disagree with.

So will the working class, who make up the majority of Scots, be better off under Independence? Well the class struggle being what it is, that depends entirely on whether they are prepared to fight for it or not. And whether they are prepared to shape the kind of Independent Scotland that emerges. The SNP leadership see an Independent Scotland much like the one we have but ‘with added sovereignty’. They see Scotland run, not in the interests of working people, but by spivs, speculators and corrupt corporations where unelected tyrants show complete contempt for ‘the rule of the people’ and subvert democratic values at every turn. The SNP is ultimately OK with that.

The Scottish Socialist Party’s vision of independence is not the same. We put the case for an independent socialist Scotland, a modern democratic republic. And over the next three years we look forward to presenting that case enthusiastically and are sure the people of Scotland will respond warmly to it. But ultimately the people of Scotland are entitled to decide all that for themselves.
Posted by Colin at 22:12 3 comments:

Come and Hear the case for an Independent Socialist Scotland 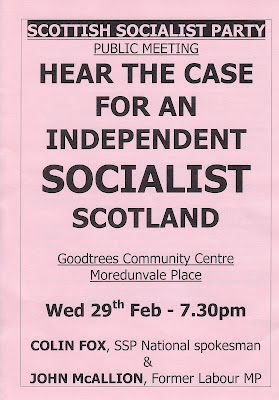 Important Public Meeting in Burdiehouse Against Fuel Poverty on Wednesday 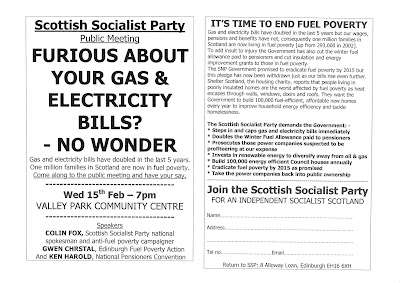 The current cold snap serves to chillingly remind us how much we all rely on adequate supplies of heating in our homes.

This is no time to be without gas and electricity and yet the cost of such essential supplies has doubled in the past 5 years. Unfortunately people's wages, pensions and benefits have not kept pace. As a result one in three households in Scotland is, according to Scottish Government figures, now living in fuel poverty.

This appalling circumstance has been aggravated by Government decisions to cut the winter fuel allowance and slash grants for energy efficiency improvements.

I have been overwhelmed by the public's response to a Scottish Socialist Party petition calling for prices to be reduced and Government cuts reversed. The 5% fall in gas bills announced in December has had next to no effect on the levels of fuel poverty and that's because it followed a 19% rise in gas and electricity bills in October.

The Scottish Socialist Party is calling on all those with an interest in eradicating fuel poverty and returning the energy industry to public ownership to come together for a conference in Edinburgh in March to examine how best to reverse the policy direction of the energy companies and Governments at both Westminster and Holyrood.

Published in the Edinburgh Evening News 7th February 2012
Posted by Colin at 21:44 No comments: