Off to the Spanish General Election - Sunday June 26th

I am off to Madrid on Sunday to observe the Spanish General election at the invitation of Podemos.

The election has been called because it is 6 months since the last election and the Spanish Constitution decrees a new vote must be held if no party/coalition has been able to command a majority in the Cortes within that period. Since the last election on December 20th resulted in a hung parliament and none of the 4 main parties could agree to govern separately or together the June 26th vote has been called.

The latest opinion polls suggest little has changed however since December in terms of popular support. The conservative Partido Popular [PP] stands on 29% of the vote, Podemos [We Can] is on 25.5%, PSOE [the Labour Party] 20% and the smaller right of centre party Cuidadanos [Citizens] is on 14%. [Source: El Pais/Metroscopia 11.6.16]

With no party again likely to emerge with enough support to form a majority in the 350 seat Cortes on its own the pressure will mount to form a coalition. The likelihood of that happening however is poor. All the possible permutations failed to materialise last time. So there is likely to be a prolonged political impasse.

All of this is bad news for the economy and continues the journey into uncharted political waters for post Franco Spain. The country has been governed by either the PP or PSOE since the 1970's. But that all changed when the Spanish economy 'went off a cliff' following its financial collapse of 2008. The unprecedented economic crisis that followed also unearthed massive corruption and bribery at the heart of the Spanish banking sector and political establishment. The PP and PSOE leaders were caught red handed and thoroughly discredited by their financial corruption.

The economic collapse and social outrage at the corruption scandals led to the emergence first of Podemos [We Can] on the Left and then Cuidadanos [Citizens] on the Right. Both changed the face of Spanish politics.

Economically Spain remains in huge trouble. Unemployment as a whole is running at 20% and youth unemployment at 50%. The country has seen one million people emigrate in the last 5 years alone. The EU was forced to step in and bail out the Spanish finance sector. The country now has one of the highest debt: income ratio's in the world. It owes its creditors more than one Trillion Euros. The social consequences of the collapse are pitiful. 30% of the population are now living in poverty and unable for instance to afford the electricity they need to keep warm in the winter and cool in the blistering summer sun.

Podemos and their pony-tailed leader Pablo Iglesias have promised to create a million new jobs, to renegotiate EU debt repayments, invest in health and education provision and industrialise Spain's economy by moving away from the traditional sectors of tourism, agriculture and construction. Their hopes of forming Spain's first Left-wing Coalition Government since the 1930's rest with PSOE leader Pedro Sanchez. But there is no love lost between the two parties. More importantly their political differences are profound. Podemos are anti-austerity. PSOE are much more economically and socially conservative. On the crucial issue of Spain's constitution where areas like Catalonia, the Basque country, the Valencien community and Galicia the two party's share a desire to maintain the unitary state. But Podemos is in favour of independence referenda in these areas with a new constitutional settlement might loosen the grip of Madrid and devolve even more power to the localities.

In an attempt to boost its own level of support, increase the pressure on PSOE and ultimately break the deadlock in government Podemos has reached an agreement with the Spanish Communist Party [Unida Izquerida] to form an alliance for this election and will appear on the ballot paper as Unidos Podemos [United We Can].

I am looking forward to the election campaign and learning much more about Podemos's programme and strategy in the next week or so. And I will be filing regular reports from Madrid here on my blog over the next ten days. 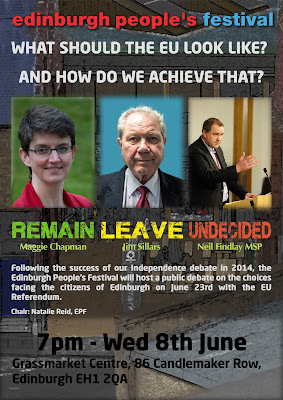 The Edinburgh People's Festival hosts a debate on the forthcoming Referendum on Britain's membership of the EU on Wednesday at The Grassmarket Centre in Candlemaker Row.
The event offers the citizens of Edinburgh help to decide whether to Remain or Leave the EU.
Former SNP Deputy leader Jim Sillars will make the case for leaving the EU, Maggie Chapman from the Scottish Greens will outline the Remain view and Lothians MSP Neil Findlay will also join us to explain why he is as yet still undecided.
Doors open at 7pm and the debate will be chaired by Natalie Reid from the Edinburgh People's Festival.