FUEL POVERTY SET TO GO THROUGH THE ROOF

Last week the Scottish Government reported the latest fuel poverty figures were up 7% in Scotland to 800,000 households. So the news that Scottish and Southern Electric are to increase gas and electricity bills by a further 9% will send a shiver up the spine of many a struggling family.

It beggars belief that SSE hasn't noticed its customers are going through the worst recession in 80 years as it proposes to increase bills by four times the rate of inflation!

On assuming office in 2007 First Minister Alex Salmond promised to eradicate fuel poverty in Scotland by 2015. That pledge now lies abandoned. And before he points out energy policy is a reserved matter it didn't stop him making the pledge and there is still much he can do. He could join with me in pressing for gas and electricity bills to be capped. This latest 9% hike will inevitably lead to many more people in this country dying of 'cold related illnesses'. He could insist power companies suspected of profiteering are prosecuted. He could argue for the winter fuel allowance to be doubled for pensioners and other vulnerable groups instead of being cut in half as George Osborne has done. He could increase investment in renewable energy to diversify away from the exorbitant cost of oil and gas. And he could join with the Scottish Socialist Party in calling for the power companies to be returned to public ownership to ensure no citizen is denied the heating they need in a country as rich as ours in the 21st century.
Posted by Colin at 11:53 No comments: 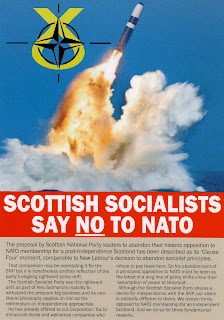 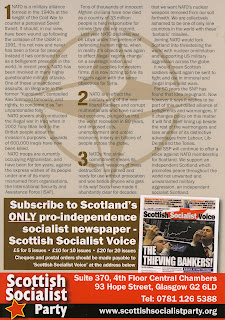 A Nation Decides: On Independence For Scotland - A Debate


The Edinburgh People's Festival proudly presents a debate on Independence for Scotland.
Out Of The Blue. Leith.