Osborne, Clegg and Cameron punish the innocent to let their guilty friends off the hook

I attended a protest on Tuesday evening in the centre of Edinburgh against the blistering assault on the living standards of millions of working class people and their families unveiled in the Government's Budget.
George Osborne is the multi millionaire Chancellor in multi millionaire Prime Minister David Cameron's Government. He sits next to multi-millionaire Deputy Prime Minister Nick Clegg - public schoolboys all three of them. Their Eton upbringing prepared them for occasions just like this. They will ensure that the living standards of millionaires are protected by sticking the boot into those who didn't go to public school, to Oxbridge, to the city or to the Palace of Westminster, born with a silver spoon in their mouths.
If you don't understand the Budget let me simplify it for you. The rich are working a con on the rest of us. Clegg, Cameron and Osborne propose to protect the bankers and financiers who made a killing on the markets over the past 25 years from being held to account for their reckless,greedy and selfish actions which led to the collapse of the British economy.
The Budgets purpose is to protect those guilty of bankrupting the economy by making all the rest of us pay and pay heavily through unemployment, house repossessions, reduced social and welfare services, financial pain and social deprivation.
Unfairness is not the word to describe this behaviour and political approach, as its criminal.
Capitalism in Britain is in a profound crisis, morally poisoned and rotten to the core its intends to make working people pay.
The die is by no means cast in this conflict it will be a test of the rich and their resolve as well as the resolve of the labour, trade union and socialist movement to stand against the stream.
Posted by Colin at 06:50 1 comment:

The Scottish Socialist Party National Council yesterday voted to contest the regional list seats in the Scottish Parliament elections next year and to begin the process of selecting candidates, shaping policy priorities and gathering in the necessary resources for the contest immediately.
The decision to contest next year's Holyrood elections underscores the SSP's determination to put our socialist policies before voters. We were successful in getting six MSPs elected in 2003 but the party lost them all at the last Scottish Parliament elections in 2007.
The regional list uses a form of proportional representation to "top-up" the number of MSPs elected through the traditional first-past-the-post constituency system.
As well as adamantly opposing job and service cuts, we will also be campaigning for free public transport, a massive boost to council house building and the scrapping of the hated council tax and its replacement by an income-based Scottish service tax.
As far as we are concerned there has never been a more urgent need for socialists in the Holyrood Parliament as the four big business parties conspire to slash jobs and cut services.
Posted by Colin at 17:12 No comments:

Here below is an article I wrote on Free Public Transports for the Voice.

The Scottish Socialist Party’s National Council meets this weekend to consider proposals to establish a broad based free public transport coalition in Scotland aimed at making it a centrepiece of next years Holyrood election.
Progressive opinion is united as never before on the threat global warming poses to the peoples of the world. It is also agreed on the need for radical united action to deal with the danger and accepts we have to consider far reaching changes to our way of life if we are to defeat it.
We must find ways to generate electricity and power our various modes of transport without burning vast quantities of fossil fuels. The biggest producers of harmful emissions in the world today are coal, gas and oil fired power stations that spew out billions of tonnes of CO2 gases annually. The most pressing challenge then is to develop cleaner ways of generating electricity. Of course finding those solutions is not going to be easy, not when China opens a new coal fired power station every few months, and both Australia and the United States continue to defy demands for greenhouse gas reductions.
Recent set backs with ‘carbon capture’ technology make the prospect of making fossil fuel plants largely inert much less likely. It had been hoped that the Longannet power station in Fife would become the worlds first coal fired plant to store its CO2 underground - under the Forth estuary – but plans were dashed when it emerged the space required had been severely miscalculated and would need storage capacity ‘the size of a small US state’ to be viable. The focus is very much centred on the need to reduce consumption and to develop alternative sources of power from wind, tidal, solar, biomass and other ‘green’ technologies.
Whilst that debate is ongoing attention has shifted to reducing vehicle emissions. Transport is the 2nd largest producer of CO2 emissions and 90% of it comes from cars.
The Scottish Socialist Party has been examining the issue for some time. We are hugely impressed by the experience of the Belgian city of Hasselt, in Flanders. In 1997 the authorities there faced chronic congestion, poor air quality and pressure from the car lobby. But instead of building more roads they decided on a more radical approach. They abolished fares on their entire public transport system. Critics scoffed at them, said it was madness and forecast people would never leave their beloved cars just because the bus was free. Yet in the space of three years passenger numbers in Hasselt increased tenfold from 330,000 in 1996 to 3.7million. The new scheme led to lower pollution as air quality improved. Road accident rates fell, billions were saved on road building programmes and repairs.Social inclusion rates improved markedly. The Mayor of Hasselt Steve Stevaert was so impressed he famously concluded ‘We don’t need any more new roads, we need new thought highways.’
The SSP advocates replicating the remarkable success enjoyed in Hasselt on a nationwide basis by introducing free travel on all buses, trains, Glasgow’s underground system, Edinburgh’s trams and for foot passengers on our ferries. We believe this measure, never conducted on a national basis before, will provide a huge incentive for people to leave their cars at home and in doing so emulate the Hasselt success.
Implementing our proposal would require re-regulation of the buses and establishing a Scottish Bus Group to ensure the system was wholly integrated. Next we’d take our railway network into public ownership and legislate to abolish fares.
The cost of introducing free public transport throughout Scotland would be £1bn; £500m pa, the current income from fares, plus the cost of the new buses, trains and extra infrastructure needed to cope with the greatly increased demand. Of course £1billion is a lot of money. However, these costs would be greatly offset by several factors. The CBI in Scotland for example estimates congestion costs the economy £1.2bn a year. The NHS would save substantially from reduced levels of respiratory illnesses and road traffic accidents. Furthermore 850,000 low paid workers who pay between £50-£100 per month in bus and train fares would also clearly benefit. And this does not even quantify the improvements in the quality of life that follow these outcomes.
However even these financial advantages are outweighed by the climatic benefits to be gained by substantially reducing our CO2 levels. Sir Nicholas Stern chaired the Inter-Governmental Conference on Climate Change and in his conclusion he famously said that ‘The cost of doing nothing is the greatest of all.’
Last month’s Public and Commercial Services union conference in Brighton voted to endorse free public transport as a way of reducing global warming. I addressed the conference and outlined why the Scottish Socialist Party supports the measure as a way reducing CO2 emissions and persuading people to leave their cars at home.
A wide range of organisations now backs the free public transport initiative internationally. The endorsement of Britain’s biggest civil service union is a significant addition.
Posted by Colin at 22:28 1 comment:

The picture below was taken by Edddie at the demonstration on Saturday 5 June in protest at Israel's killing of 9 innocent peace activists on board the Mavi Marmara humanitarian aid to the Gaza Palestinians. It shows me asking people to come and sign the SSP petition to hold Israel to account for her actions and to lift the siege of Gaza. 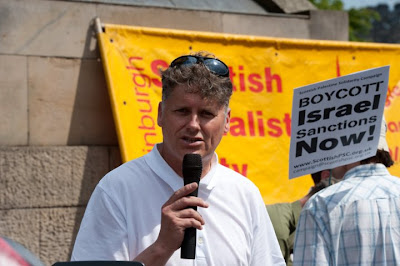 The world must hold Israel to account for killing peace activists

The world is outraged that peace activists carrying humanitarian aid - food, fuel, medicines and wheelchairs - to Gaza were killed in cold blood aboard their own ship in a premeditated attack by heavily armed Israeli commandos. The deadly assault on innocent civilians is an affront to humankind. The Israeli Government claimed the flotilla of ships were carrying rockets and other ammunition that would be used to fire on Israel. This claim is not only false, it is an insult to peace activists who, unlike the Israeli military, are motivated by a desire to bring peace to all the people's of the Middle East. People throughout the world were rightly horrified at what they saw.
The Scottish Socialist Party demands:
*The Israeli Government is held to account for its actions
*The blockade of Gaza must be lifted forthwith
*The British Government must press Israel to stop building in the occupied territories, this land belongs to the Palestinians
*Justice for the Palestinian people is a prerequisite for peace in the Middle East

Join me on the Palestinian Solidarity Campaign protest this Saturday 5th June 2pm at the foot of the Mount, Edinburgh.
Posted by Colin at 18:48 No comments: