Reflections on the MP's Expenses Scandal

Watching the outrageous and at times sickening feather bedding and corruption of our MP's these past two weeks I was repeatedly reminded of the wise words of advice James Connolly, the great Edinburgh socialist, gave to those seeking to represent working people.'Rise with your class, not out of it.' said Connolly condemning in particular in my view those Labour MP's who masquerade as representatives of working people and the poor.When I had the great honour of representing the people of the Lothians at Holyrood between 2003-2007 I was guided by Connolly's principle. I took it to mean that until such time as those I represented enjoyed the wages, conditions and privileges I did then the inflated salaries and perks were not due to me either. That is why all SSP MSP's took the average wage of a skilled worker and donated the rest of our £55,000 salary to the party. For me that meant writing out a cheque for £1,300 each and every month to the SSP.
They say we all live in a Parliamentary or Representative democracy yet there is scant evidence our 646 MP's are typical of the population as whole. The fact is these lawyers, Old Etonians and businessmen are completely unrepresentative. Where are the health workers, local government workers, low paid civil servants, transport workers, shop workers or sheet metal workers for that matter?
If I hear someone argue that MP's are underpaid at £68,000 per annum once more I will scream. The fact is they are in the top 2% of wage earners in Britain and that is before fiddling their expenses, allowances and travel!If MP's lived on the average wage of those they represented not only would they have far more fire in their bellies and better understand the job they were sent to London to do, they would be less inclined to pass the buck to meaningless Committee's and procrastinate in countering the big scandals of our age; the poverty, inequality, ill health, homelessness and financial corruption of the bosses system.
Posted by Colin at 21:25 No comments:

Royal Mail sell off is "Labour Sell Out"

As Scottish Socialist joint national spokesman I today warned the Government that pressing ahead with the privatisation of the Royal Mail would not only be a political “sell out’’ but also a ‘’Kamikaze mission.”
Speaking ahead of Wednesday’s House of Lords third reading of Peter Mandelson's Bill to privatise the Royal Mail I issued a press release which says“Despite pretending that the EU is forcing its hand Gordon Brown and his cabinet are actually privatising Royal Mail themselves, insisting it be handed over to profit hungry private postal companies like TNT.”“I have been on Princes Street each week for months now campaigning on the issue and talking to postal workers and the public alike. It is abundantly clear that this privatisation is hugely unpopular. Nearly 90% of voters oppose the sell off. Yet still it is being pushed ahead by Industry Minister Peter Mandelson.”“You would think by now that even he would grasp how out of touch they are on this issue.
‘’With 150 Labour MP's threatening to vote against the Bill it can only now be passed in the Commons with the help of TORY MP's.”“The SSP demands Royal Mail is kept in public hands. Like the public we wish to see it remain a vital public service, owned and controlled by the public, where the profits it makes - £323m last year - go into the public purse to build hospitals and schools and not handed over to private shareholders in private postal companies like TNT.”“The expenses scandal has already undermined the Brown government and railroading this unpopular privatisation through Parliament thanks to Tory votes could well prove a fatal blow for this embattled government.”“I urge the public to contact their MPs and demand they vote to keep the profiteers paws off our Post Office.”
Posted by Colin at 21:14 No comments: 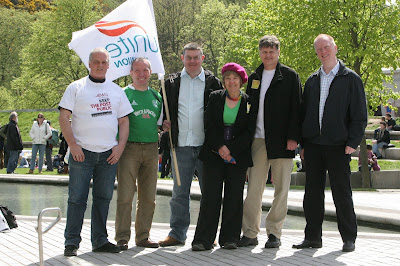 Below there is a link to the SSP alternative summit discussion:

http://www.youtube.com/watch?v=ggdukuap_M8&feature=channel
Posted by Colin at 18:43 No comments:

Make Greed History is a new campaign launched by the Scottish Socialist Party. Corporate greed is devouring our planet. Corporate greed now threatens to plunge us into a new depression. Corporate greed has to be challenged, Join the backlash against the billionaires.
Global depression. Climate chaos. Billions starving. Why?
Most of the world’s problems today can be traced back to a single cause. Greed.
For decades, the rich went on a feeding frenzy. They piled up profits galore. They devoured the world’s resources and ignited global warming. They grabbed more and more wealth for themselves at the expense of everyone else.
One per cent of the UK population now own 34 times as much wealth as the bottom 50 per cent. Never in human history has so much been owned by so few.
How the rich caused the slump
With more cash than they could ever dream of spending, the rich went on a gambling binge. Instead of using their wealth to create jobs and fuel the real economy, they squandered trillions in the casinos of global capitalism.
Now the orgy of greed has turned sour. But who will pay the price?
The Scottish Socialist Party has launched a European-wide Make Greed History Campaign. The reckless rich caused this crisis – and they must foot the bill.
Why we need a wealth tax to create jobs
In Europe today, the wealthiest one per cent of the population own liquid assets worth $10 trillion dollars.
A modest, one-off wealth tax of just 10 per cent would generate a trillion dollars to create eight million jobs across Europe.
Scotland’s share of that tax would amount to £6.5 billion – enough to create and sustain 80,000 jobs over the next three years, with an average annual salary of £25,000.
We could build tens of thousands of new homes to rent. We could reduce class sizes by employing thousands more teachers and learning assistants. We could insulate every home in Scotland.
Call it a ‘Wealth Tax’, call it a ‘Crisis Tax’ – or even call it a ‘Greed Tax’. It would be a mighty step out of recession, paid for by those who caused the crisis.
The Scottish Socialist Party stands for a green socialist Scotland in a green socialist Europe, an independent socialist Scotland.
Posted by Colin at 16:55 No comments: