Wednesday sees the biggest strike in Britain for decades as more than three million public sector workers are expected to join forces in protest at Government plans to severely reduce their pension entitlement.
I fully support all those admirable men and women on strike in Unite, Unison, PCS, EIS, NASUWT and all the other unions involved because they face a three pronged assault on their chances of enjoying some kind of dignity in retirement.
The Government insists the country can't afford public sector workers' 'gold plated pensions'. But I see little evidence of such a thing. The purported generosity in current schemes is a mirage since the average woman in the local government pension scheme for example receives only £3,500 a year when she retires or £70 a week. The Government suggests that is too much for the country to afford! They are wrong.
They want to renege on an agreed pension agreement and force people to pay in much much more contributions over the years, and work much much longer before they can claim it and finally to expect much much less money than currently when they finally retire. Not an attractive proposition at all is it?
This 'triple assault' is necessary, claim the Government, because the country can no longer afford public sector workers pensions.
But I for one am not impressed by the Governments arguments. Tory Pensions Minister Francis Maude appears to justify the changes on the grounds that private company pensions are nowhere near as high as those in the public sector. But instead of drawing the conclusion that we the need to bring them up to an adequate level he proposes the opposite 'direction of travel'. Millions of people across Britain must face poverty in retirement. I prefer the more obvious connection, the one showing that where there is high levels of unionisation pensions are better. If the private sector provides poor pensions there's an answer. Join the union and make employers face up to their responsibilities.
See you on the picket line, Wednesday morning.
Posted by Colin at 20:30 No comments: 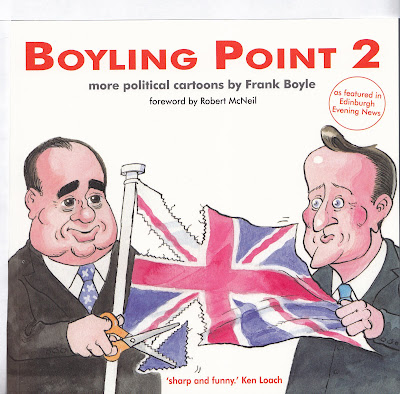 If there's a wittier cartoonist in Scotland than Frank Boyle (of the Edinburgh Evening News) then they are in hiding, because I've not seen them and I read all the papers.
Frank has won the coveted cartoonist of the year award several times and no wonder. His work never seems to lose its now legendary biting satire, sarcasm, wit and above all its irrepressible humour. To me it is often the wee remarks tucked away in the corner of the scene that crack me up the most and I often ask myself 'How on earth did he get that into the Evening News?'
Frank has joined forces with Argyll Publishing again to present his third compendium of cartoons, curiously entitled 'Boyling Point 2'. As anyone who reads the paper will testify, he is, day in day out, by miles the best thing in the Evening News - apart from those rare occasions when it mentions the Scottish Socialist Party of course. [Are you reading this Evening News Editor Tom?]
The book is now available priced £8.99. With more than 100 cartoon it's the ideal Christmas gift for socialists everywhere, as it pokes fun at all the targets we do, within and beyond Edinburgh. My favourite shows Cameron and Clegg kicking in social services office windows as a couple of frightened elderly bystanders look on and dismiss them as 'Just a hooligan minority'. Then there is the 'Holyrood takeaway' with the 4 party leaders offering food 'with added cheese...pure mince...something fishy and shaky' respectively. It reminds me of a very similar idea the SSP had in its 2010 election material where all four neo-liberal parties offer different flavours of greasy pizza. Mind you, that's Frank Boyle all over, he's forever stealing our cartoons!
Posted by Colin at 23:29 No comments: 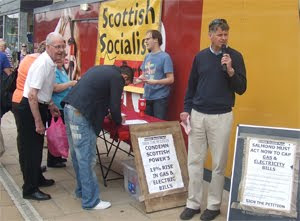 The Scottish Socialist party had one of its most successful days in years on Saturday as branches across the country reported enormous levels of support from the public for our petition to curb fuel poverty.
I was on Princes Street with Paul, Norman, Allan, Eddie, Jim, Sean and Rob [Jim and Sean are new SSP members and couldn't have hoped for a better 'baptism' in party activity]. We were all completely blown away by the fantastic response we got to our call for the power companies to be condemned for recent increases in charges. I have been campaigning on this issue for months but have seen nothing like this level of support before.
Indeed in 30 years campaigning I'd compare yesterday with stalls I have done against the war in Iraq in 2003 and against the Pol tax in the late 1980's. People were queuing up three deep around our table to get the chance to sign our five petitions in the mild November sunlight.
Over a couple of hours we collected more than 800 names [50 petition sheets with 17 names on each one]. We also met Renata and Claire who were so impressed by our efforts and the support we enjoyed that both now want to join the SSP. We sold all the Voice newspapers we had. By any measure this was our best result in many years.
It is clear that our demands - expressed through the loud-hailer, leaflets, notice boards and petitions chime with a widespread public mood.
People are furious both at power companies they see 'profiteering' at our expense, and at Governments who appear to be 'asleep at the wheel'. Government do not appear to understand people are furious at increasing bills and falling incomes. And it might be argued Government is in fact getting off lightly since they have cut the winter fuel allowance to pensioners and cut programmes giving grants towards household insulation and energy efficiency schemes.
With one million Scots families now living in fuel poverty [the Scottish Governments own figures] the situation is now critical.
The SSP has demanded that Government acts to reduce these bills, to increase financial help to the most vulnerable and extends the funds available for household energy efficiency.
But if we are to eradicate fuel poverty in Scotland - and we must - we need to diversify away from expensive and harmful fossil fuels, build 100,000 new homes annually to the latest energy efficiency standards and return the energy industry to public ownership.
As far as the campaign to achieve these objectives is concerned the next SSP EC on December 3rd will discuss the matter in some detail.
In the meantime all credit is due to those SSP members who participated in yesterdays efforts. I want to thank them. Those of us who have been campaigning on this issue for the past 6 months have been vindicated. We, in the SSP, saw this conflict coming and we had the courage of our convictions to stand up to some of the worlds biggest corporations and Government.It's clear the overwhelming majority of Scots are now behind us on this matter.
Posted by Colin at 23:50 No comments:

I attended Energy Action Scotland's annual conference this week. The conference was entitled 'A Fair Deal for the fuel poor' and it brings together all those aiming to eradicate fuel poverty in Scotland.
Amongst the workshop speakers was Simon Osborn from the consumer organisation 'Which?'. He referred to a study they had carried out in October which showed that energy bills are now the number one concern people now have in Britain. This tied in with a report published on Friday by the British Retail Consortium and Neilson which drew the very same conclusion.
And no wonder.
There are now seven million households in Britain living in fuel poverty, i.e families who do not have £1,500 for combined gas and electricity bills.
One million of those are in Scotland. Most analysts believe the Governments figures significantly underestimate the scale of the problem. Indeed the latest figures from the Scottish Government show the average family here is now paying 14% of its income on gas and electricity bills - 10% is the official definition of fuel poverty! So the average family in Scotland now has very real difficulty heating its home.

Politicians at Westminster and Holyrood are now scrambling to keep up with public anger on this issue. But their empty rhetoric is in such sharp contrast to the 'triple whammy' which confronts working class people. Rising energy bills, falling incomes and Government cut backs - on programmes designed to alleviate fuel poverty- all add up to a very potent anger.
And politicians playacting with figures instead of bringing forward meaningful measures is only likely to 'fan the angry flames'. SNP Infrastructure Secretary Alex Neil for example was caught out trying to deceive the EAS conference with claims he is increasing support for those aiming to install new boilers and household insulation when in fact his Government has cut the funds available from £71m last year to only £49m now.
And what struck me about this EAS gathering of industry professionals was the pessimism they demonstrated about the chances of eradicating fuel poverty in this country any time soon. It's true to say most expect the situation to get worse and worse and worse.

The UK Governments 2012 Green Deal was described by several delegates as a 'car crash' which will do little to help the fuel poor. At a time of record indebtedness and falling incomes this Government scheme suggests people should take on further loans to insulate their homes.
There is of course much to be said for a thorough going public programme of insulation and energy efficiency in Britain. After all we are light years behind the Scandinavians who although they pay more than us for gas and electricity, they consume much much less because their homes are far more fuel efficient. Norman Kerr, Director of EAS, estimates Scotland needs to spend £200m annually to bring our housing stock up to adequate levels of energy efficiency. The Government currently commits only £40m/year to this end.

Governments have repeatedly been caught cold on fuel poverty. In 2000 the Westminster Parliament passed the 'Warm Homes and Energy Conservation Act' which included a statutory commitment to eradicate fuel poverty in Britain by 2015/16. Unfortunately this is another promise MPs will fail to honour [just as they have now done with child poverty promises]. Their forecast is now in tatters as they mistakenly calculated that energy bills would rise by 5% between 2005-2010. In fact they have doubled, risen more than 100% and fuel poverty has now reached record levels.

Perhaps the most startling figure to emerge from the conference was contained in Professor John Hills report, commissioned by Government that more people will die of fuel poverty/cold related illnesses in Britain this year than die on our roads.
Derek Lickorish, Chair of the UK Government's Fuel Poverty Advisory Group believes the problem will get worse and worse as prices rocket, incomes fall and Government programmes are increasingly not fit for purpose.

The Scottish Socialist Party National Council in Glasgow yesterday committed the party to a 'day of action' on the issue of fuel poverty on Saturday 19th November and all SSP branches will be offering the public a chance to vent its anger in town centres and shopping centres everywhere.
Posted by Colin at 20:16 No comments: