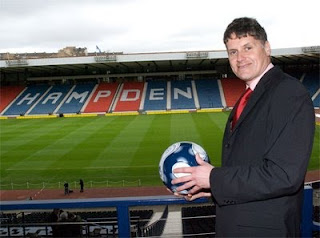 Last Tuesday was an especially hectic, and productive, day for the Scottish Socialist Party. I started the day at 7.30am by appearing on Radio Scotland's Good Morning Scotland. I then travelled through to Hampden stadium for the launch of our manifesto. We highlighted our flagship policy of Free public Transport as well as unveiling over 400 policies covering all aspects of life here in Scotland. We also launched a special manifesto/elections website - http://www.ssp-election-2007.org.uk/
Later on that evening our first election broadcast was aired and was described by Proclaimer Charlie Reid as a "Brilliant broadcast, modern day Marxism meets Trumpton", the first of two Scottish Socialist Party election broadcasts for the 2007 Scottish Parliament elections 2007. This one is on the SSP's free public transport policy
Posted by Colin at 18:19 No comments:

Predictions of the demise of the SSP have once again been proven to be the wishful thinking of those who would like to see the end of Scotland's biggest and best socialist party.
As well as standing on the regional list, the SSP is standing candidates in 31 of the 32 council seats across the Lothians (17 in Edinburgh, 6 in Midlothian and 8 of 9 in West Lothian).
In West Lothian we've decided to stand aside in the Broxburn, Uphall & Winchburgh ward in favour of, former nurse, Ellen Glass of the "stop the downgrade of St John's campaign".

I've also pasted below an article I wrote for the South Edinburgh Echo.

Local Council Elections –SSP [100 words]
The Scottish Socialist Party will be standing candidates in every Council seat in Edinburgh. Our candidates are all local activists.
In Liberton / Gilmerton our candidate will be none other than our sitting MSP and party national convenor Colin Fox. Colin lives in the Inch and has two children at the local primary school. His partner Zillah is a midwife at the new Royal Infirmary. His candidacy shows our commitment to South Edinburgh one area which Colin has served these past four years at Holyrood.
The SSP candidate in Southside /Newington is Scott Simpson who works as a community worker in Craigmillar.
And in Meadows /Morningside we present Helga Janzen a payroll manager from Marchmont involved in a variety of local issues including campaigns for better public transport and protecting local shops.

Scottish Parliament Elections
Colin Fox MSP will once again head the Scottish Socialist Party challenge in the Lothians.
Colin is seeking re-election to Holyrood and is proud to put his record in fighting for the interests of working families this past four years in front of the electorate.
He will be joined by a list of candidates, men and women from across the Lothians bringing a wide variety of skills and experiences together.
The most important issues for the SSP are
;the abolition of the hated Council tax – to be replaced by a local tax based on income/ability to pay
;building 20,000 new council houses across the Lothians to address the appalling difficulties people now have in getting a decent home to live in
;the introduction of free school meals for all pupils to help address the scandalous child poverty which continues to shame Scotland
;free public transport for everyone which we believe is the most innovative and radical measure thus far presented to tackle the issue of climate change,pollution and congestion- offer people a better alternative to the car and they will take it
;and of course our defining policy is our support for an independent socialist Scotland.

The Scottish Socialist Party rewrote the history books when they got 6 MSP’s elected in 2003. We believe we can again do so again.
Over the past 4 years no one has worked harder for working people and the things they value the most than the SSP. We have opposed the hideous and barbarous war in Iraq, we have argued for public ownership and public services against the incessant drive towards privatization of this executive.
We have opposed the package of cuts in services at Scottish Parliament and Council level. Colin was for example at the forefront of the successful campaign to keep local schools in Edinburgh open and to keep a full array of health service in place across the region.
The SSP MSP’s have been the socialist conscience of the Parliament. In championing the rights of the most vulnerable and needy in our society Colin was elected as ‘a workers representative living on a workers wage’. He donates half his £55,000 salary to campaigns committed to improving the lives of ordinary people. He follows the wise advice of those founders of the socialist movement who advised those seeking to represent working people - ‘rise with your class not out of it’.

The Scottish Socialist party list for Holyrood includes people from all over the region each with a wealth of experience and commitment to making the region much more equal and just and fair for ordinary people. Edinburgh is a very rich city and we want to see much more of the great wealth accumulated here going to those who need it the most; to children living below the poverty line, to pensioners struggling to get by on a daily basis on a meager pension, to the needy in a rich city. Yes we want to redistribute the wealth of the city from the rich to the poor.
Posted by Colin at 18:00 No comments: 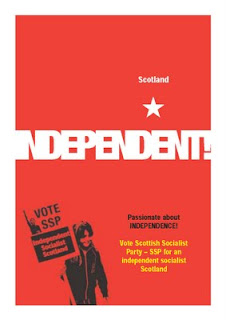 Scottish Socialist Party leader Colin Fox will tell a public meeting in Edinburgh tomorrow night that Scots would be ‘economically, socially, culturally and politically better off’ under Independence.
Responding to polls which suggest a majority of voters want more powers devolved to the Scottish Parliament rather than outright independence, Mr Fox told us.
‘Ironically it is the powers that devolution denies people that they want the most.
-the power to raise all our own revenues, including oil revenues and Corporation Tax,
-the power to keep Scottish soldiers from being sent to fight in a illegal war in Iraq,
-the power to get rid of Trident nuclear weapons based on the Clyde
-the power to reverse the privatisation of our public services.
-the power to lift the low paid out of poverty and raise the minimum wage to £8/ hour,
-the power to pay seniors a decent pension not the pittance they currently receive,
-the power to redistribute the huge wealth of Scotland from the rich to the poor.
These are the powers voters want but we of course we will simply not get them unless we are independent, that’s the rub!
‘I have no doubt that working people would be economically, socially, culturally and politically better off under Independence.
‘There can also be no doubt nowadays that the political centre of gravity of most Scots is to the left of New Labour – and the New SNP for that matter! I therefore urge voters to ensure there is a full socialist presence at Holyrood after May 3rd to insist on the changes they want most.’

EXCLUSIVE Proclaimer dumps Alex over business cash
By Brian Lironi, Political Editor
PROCLAIMERS star Charlie Reid has dumped the SNP in protest at their links to big business.
Charlie and twin Craig - at No 1 with Comic Relief single I'm Gonna Be (500 Miles) - were Alex Salmond's biggest celebrity backers after Sir Sean Connery.
The defection to the SSP is a crushing blow for the Nats just a month before the Holyrood election on May 3.
It will stun supporters and spark a new debate about the SNP's controversial funding from anti-gay campaigner and Stagecoach founder Brian Souter.
Charlie, 45, said he had already given the SSP a donation but brother Craig will continue to support Alex Salmond's party.
In an exclusive interview with the Sunday Mail, Charlie, who first shot to fame with Letter From America, said: "I'm changing my allegiance from the SNP to the SSP.
"I still have a lot of respect for people like Alex Salmond, Kenny McAskill and Nicola Sturgeon and I think they will form the government after the election.
"But I think they are placing too much emphasis on courting big business.
"For that reason, I'll be voting for the SSP at the election.
"I think it's important to have a party in the parliament with left wing principles prepared to stand up to big business."
Charlie has already met SSP leader Colin Fox and sent a cheque to boost party coffers. The pair first met in February at a demo to campaign for better sports facilities for kids.
Charlie and Craig are hugely popular figures in SNP circles but Salmond has spent a lot of time and effort wooing big business.
He has received the backing of influential figures including former Royal Bank of Scotland chief Sir George Mathewson - and donations of £100,000 from Sir Tom Farmer and £500,000 from tycoon Souter.
But he has been criticized for taking the money from from Souter, who led the campaign against the repeal of anti-gay law Clause 28.
SSP leader Fox said: "I'm delighted Charlie has now chosen to give his public backing to us."
An SNP spokesman pointed out that they had just enlisted the support of singer Sandi Thom.
He added: "The SNP have growing support among Scotland's arts community, as we do across Scottish society."