Fox targets Chancellor in his Westminster lair at election

Published date: 23 February 2010
SCOTTISH Socialist Party leader Colin Fox is to stand against Chancellor Alistair Darling in his Edinburgh South West Seat at the general election.
The former Lothians MSP said: "I will challenge Alastair Darling on his stewardship of the economy, the fact that he took this country into the deepest and worst recession in 80 years and because he now intends to sacrifice the jobs and services of working people to pay for his incompetence and the bankers' greed."
Mr Fox said the SSP would fight ten seats at the election, concentrating on two key issues – the economy and Afghanistan.
Also standing in Edinburgh South West will be Caroline Bellamy, a sewing machinist, representing the Communist League.
Posted by Colin at 19:23 2 comments: 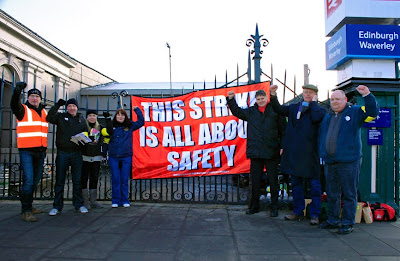 I was proud to be invited to join striking railway workers on their picket line at Edinburgh's Waverley station this morning to offer the Scottish Socialist Party's support to the 550 conductors and guards striking against Scotrail management's plans to impose driver only trains on the new Edinburgh to Glasgow line through Bathgate and Airdrie due to open later this year.
Despite the obvious inconvenience suffered, the public overwhelmingly supported the unions cause.
The guards, conductors and ticket examiners on strike throughout Scotland today deserve the full support of the travelling public. They certainly have mine. This dispute centres on Scotrail management's plans to introduce driver only trains on this busy line for the first time. All trains running between Edinburgh and Glasgow currently have at least two members of staff serving the public.
The travelling public have made it repeatedly clear they prefer to have a guard or conductor on board to deal with whatever eventualities may arise.
This is after all the busiest part of the Scottish rail network. Reducing this service to a driver only operation neither meets the public's wishes nor keeps to the franchise agreement which Scotrail signed with the Scottish Government.
I was able to sat to those union activists I met this morning that I want to see services on our national rail network improved not suffer further deterioration. That is why I stand 100% behind the Rail, Maritime and Transport union members today because I see them defending the service Scotrail delivers to the public who after all pay for it through their fares and their taxes.
Posted by Colin at 18:35 No comments:

How many more must die before Brown comes to his senses?

The Herald [9/2/10] reported the number of British soldiers killed in Afghanistan has surpassed the figure reached in the Falklands war. This surely begs the question how many more must die before Gordon Brown comes to his sense?
Longstanding readers of this newspaper will recall that now infamous and ultimately hollow assurance given by the Defence Secretary John Reid back in 2001 that 'British troops will be home [from Afghanistan] by Christmas with barely a shot being fired'. His present day counterpart Bob Ainsworth by way of stark contrast warns us to 'hold our resolve' as a severe increase in casualties is anticipated from Operation Moshtarak, an assault on the Taliban stronghold of Marjin.
It is important to recognise that our 8 year occupation of Afghanistan has not only produced British fatalities. Some 50,000 Afghan civilians are also reported to have been killed.
Tony Blair's decision to invade alongside 'his partner in crime' George Bush was taken even though he knew the Afghans were no more responsible for the 9/11 bombings they were charged with than Saddam Husein was a year later.
The Taliban are odious Islamic fundamentalists it is true, but no more odious than the warlords who currently sit in Hamid Karzai's Government in Kabul 'wined and dined' by Gordon Brown at conferences in London. The Taliban are insular Pashtoun nationalists with no interests beyond Afghanistan and were no threat to us. Furthermore as the acclaimed journalist John Pilger has revealed, they offered to hand over Osama Bin Laden three times and were rebuffed on each occasion by a US administration intent on 'military solutions'.
The fact is Britain's occupation of Afghanistan against the express wishes of its people does not improve our national security one bit, rather it provides 33m Afghans with an incentive to run off and join the insurgency dedicated to 'liberating' their country.
A clear distinction emerged in British consciousness during World War One between the 'lions' in the trenches and the 'donkeys' in the high command. Today the professionalism, bravery and fortitude of British soldiers in Afghanistan is in start contrast to the deceit of the 'donkeys' in the political high command who shame the nation with their lies and political cowardice and shed 'crocodile tears' for young men who ought never to have been sent there in the first place. Our politicians at Westminster ignore the polls showing 70% of Britons want our soldiers brought back home and have themselves shown, just as they did whilst they were fiddling their expenses, that they are completely out of touch with public opinion in this country.
Posted by Colin at 20:24 No comments:

I have been invited to speak at the Socialist Republican Convention in London this weekend. The event which takes place at the South Bank University will feature Tony Benn, Peter Tatchell and John McDonnell MP among others and promote the case for a republic in Britain as well as bring together socialists from Scotland, England, Ireland and Wales.
The Scottish Socialist Party supports a modern democratic republic for Scotland and has done so since our formation in 1999. We remain Scotland's staunchest advocates for extending democracy and establishing a republic.
In 2003 all 6 SSP MSP's famously refused to take the oath of allegiance to the Queen after being elected to represent the people of Scotland. It seems a long time ago now but I was ejected from the Parliament for singing Robert Burns famous republican anthem 'A man's a man for a' that' in defiance of the oath. My colleague Rosie Kane famously wrote 'My Oath is to the people' on the palm of her raised hand as she was sworn in.
That same year I undertook a speaking tour of Australia and New Zealand as a newly elected Member of the Scottish Parliament. In seven Australian cities I teased the largely republican audiences over the fact that the population had just voted in a referendum to keep the Queen as their Head of State saying 'Well if you want her you can have her. We in Scotland would even pay her fare as long as you keep her here'.
Scotland remains the only part of Britain where polls suggest a majority in favour of a modern democratic republic.
The SSP's 'Declaration of Calton Hill' delivered on the 9th October 2004 the day the Queen formally opened the new Scottish Parliament building at Holyrood remains a rallying point for supporters of a modern democratic republic.
I look forward this weekend to ridiculing the positions New Labour and the SNP have now gotten themselves into on the issue of a republic. Take Labour for example, the first ever resolution passed at the first Labour conference called for the abolition of the House of Lords and yet in this years General Election they will argue for the maintenance of an appointed second chamber. The Tories, once the party of hereditary privilege now support an elected upper house. Can you believe it? Keir Hardie must be spinning in his grave.
But before you run off and vote SNP in disgust you might wish to reflect on Alex Salmond's view of hereditary privilege. He wants to retain the monarch as head of State in Scotland. In his modern Scotland the outdated Act of Union of 1707 would be scrapped but the 1603 Union of the Crowns would remain! So Alex Salmond and the SNP would deny Scotland its chance to have a modern democratic republic!
The challenge facing us is to mobilise the majority who wish to establish a modern democratic republic. And for my money it can't come quick enough.
Posted by Colin at 20:52 No comments: 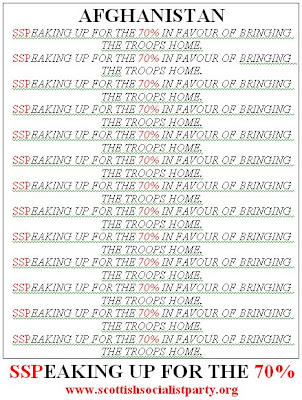