Tommy Sheridan’s conviction today for perjury was utterly inevitable.
Six years ago, as leader of the Scottish Socialist Party, he proposed to sue a tabloid newspaper over stories he knew to be true and demanded that I and our party went along with his lies. All his closest friends and political allies of 20 years urged him not to take such a reckless course of action.
All those who have been falsely denounced by him and his allies as liars, plotters, perjurers and political backstabbers have been cleared.
The idea that there was a conspiracy involving Rupert Murdoch, Lothian and Borders Police and the SSP is complete nonsense. Yet this is the narrative that Tommy Sheridan and his supporters pedalled for the past 4 years.
By his actions over the past six years Tommy Sheridan has disgraced himself and negated his political contribution to the socialist cause. History will now record that he did more harm to the socialist cause in Scotland than any good he ever did it. And that astonishing conclusion would not have been thought possible at the height of the poll tax struggle he led so well, or during his early period in the Scottish Socialist Party and Scottish Parliament.
The SSP reaffirms that our aim is to defend the interests of working people, the millions against the millionaires and to work for a socialist transformation of society in the interests of the majority. We can at last now draw a line under this awful episode and move on. In this time of savage attacks by the rich against the poor, Scotland more than ever needs a strong left wing socialist party that can be trusted.
Posted by Colin at 21:01 No comments: 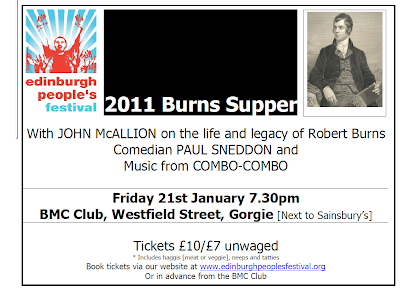 Letter to The Herald on Afghanistan's occupation

Dear Sir
David Pratt's excellent article on Britain's occupation of Afghanistan in Fridays Herald [3/12/2010] records that 'Our forces have now outlasted the Russians'. This is of course no cause for celebration. We have after all missed a dozen previous deadlines for withdrawal during the last nine years and 57 days.
The first was set by the UK Defence Secretary John Reid, now of this parish, who famously forecast we would be out, and home, uninjured by Christmas 2002. Worse than that failed promise, as David Pratt rightly acknowledges, our occupation is now hated by 33million Afghans every bit as much as the Soviet one before it. And why?
Perhaps figures released last week by Channel Four News provide some clue. They showed a 163% increase in the number of civilian war wounded in Afghanistan over the past year. The second poorest country in the world is suffering excruciating misery and chaos with no end in sight. No wonder then the old man whom David Pratt interviewed screams out such hatred for UK and US forces occupying his country. They 'come, shoot, kill and destroy' just as the Soviets did before them he said.
It is impossible to under state the scale of our failure in Afghanistan if as the British Government claim we 'went in with the best of intentions hoping to deprive Islamic terrorism of a base and sanctuary and bring some kind of peace and stability'. It is not good enough to conclude as David Pratt does however that only 'political blundering stirred up resentment towards the occupying foreigner'. The truth is we invaded a country guilty of no crime. We have occupied it now, against the express wishes of its people, for nearly 10 years. We installed one of the most incompetent and corrupt regimes in the world to run it. Some 50,000 innocent Afghans have been killed and countless wounded and severely injured. So where is this peace and stability? Rather than deprive Islamic fundamentalism of a base we now provided it with a 'accelerant' to fuel its fires. Millions of civilians provide daily sanctuary for the Taliban who are rubbing their hands waiting for a US military defeat just as they did with the Soviets.
It is clear Britain and America paid little heed to the Russian experience. Their arrogant imperialist attitude with its lingering and misplaced belief in technological military superiority are leading inexorably to the same painfully obvious retreat of the Soviet experience in 1989.
The people of Scotland meanwhile have continued to make it clear in poll after poll after poll that they want no part of it and wish to see our troops brought home now and this senseless occupation brought to an end.
Posted by Colin at 17:53 No comments:

I don't know many artists and I cant really relate to the Turner Prize. To be honest I don't really understand the art that is exhibited in it.
But I was absolutely delighted to watch this years award ceremony on Channel Four News live from the Tate Museum in London. Delighted and thrilled because this years winner is my old friend Susan Philipz. She is now a world renowned artist.
Susan and I were in the Labour Party Young Socialists and Militant together in the West of Scotland in the 1980s and 90s. She certainly doesn't fit the image I have of Turner Prize winners and that's a good thing. The last time I saw was at a branch meeting in Pollok. She was with her then partner Gary Stevenson aka Gary Lewis the actor. [He played Billy Elliot's dad in the film]. She and Gary were exceptionally talented artistically. I am thrilled to bits for her in winning this award.
I understand she lives and works in Berlin now but I feel happy to know her and to see her enjoy such success. Well done comrade Susan.
Posted by Colin at 19:18 No comments:

Scotland bill: further concessions on the road to independence or buttressing the union?

While I welcome all the extra powers the Scottish Parliament can wring out of Westminster I remain convinced that only a fully independent republic will serve Scotland’s needs.
The Calman Commission recommendations which underpin the Scotland Bill published this week are in truth little to do with extending Holyrood's powers - they do allow monies raised in Stamp Duty and any new landfill taxes to remain here, but the additional powers are indeed very minor extensions - as their central purpose is to make Holyrood more accountable to the electorate for its expenditure decisions.
The power to raise income tax, the Bills central proposal, already exists via the referendum held in 1997. They have of course never been used and the reasons are simple enough. The prospect of paying higher taxes in Scotland compared to the rest of the UK is not something voters would relish. Indeed in the last decade only the possibility of reducing taxes here by 3p in the pound have been contemplated by the four neo-liberal parties in control of the purse strings at Holyrood.
The recent fiasco over the SNP's decision to let the current 3p income tax varying power lapse was like watching two bald me fighting over a comb as none of the major parties in Holyrood have any intention of using these laws.
What is required is a Scottish Government which takes on the wealthy, that raises the taxes of the super rich through measures such as the Scottish Service Tax - the SSP's income based alternative to the hated Council tax. Of course the Scotland Bill traps any Government at Holyrood intent on implementing such measures as it cuts the current block grant from Westminster by up to 35%. So Westminster giveth and Westminster taketh away. And that of course is the rub. Indeed it was always the aim of the Calman Commission.
The SSP meanwhile supports an economic policy which meets the needs of the millions not the millionaires. We recognise that in this day and age only a fully independent Scottish republic can deliver that.
Posted by Colin at 20:36 3 comments: