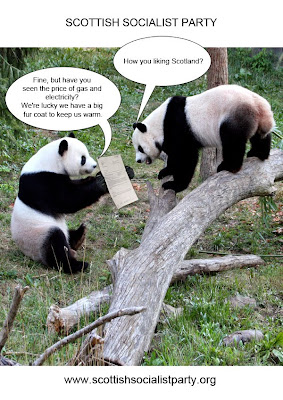 My friend Andrea is a designer and came across some new friends chewing over the exorbitant cost of gas and electricity in Scotland.
Posted by Colin at 21:29 2 comments:

5% cut in energy bills is nowhere near enough

All 6 energy companies have now announced a reduction in prices of around 5%. So much for claims they don’t act as a ‘cartel’! But anyone who thinks this will have anything other than a marginal impact on the scandalous levels of fuel poverty should think again. Gas and electric bills have gone up 100% in the last 5 years. There remain one million households in Scotland, for example, paying more than 10% of their entire income on energy – the official definition of fuel poverty. That's a fourfold increase in a decade. With bills soaring and incomes plummeting Scotland has a huge fuel poverty crisis on its hands. And like every other crisis it has its casualties. Professor John Hills from the London School of Economics, commissioned by the UK Government to examine the scale of the problem, concluded that 27,000people will die this winter as a result of chronic fuel poverty. This is more than are killed on Britain’s roads annually. At the same time the industry regulator OFGEM has accused the power companies of profiteering and launched an investigation. Company profits rose by 733% between June and October as they made £125 per household compared to £15 earlier. The Scottish Socialist Party has been campaigning against this outrage for several months calling on Governments at Westminster and Holyrood to snap out of their lethargy and recognise the full extent of the crisis. They need to bring bills down much further than 5% and they need to increase the winter fuel allowance paid to pensioners and other vulnerable groups. They also need to invest in household energy efficiency schemes to match those in Scandinavia. But ultimately it is only when this industry is returned to public ownership that guaranteeing adequate supplies of heating and lighting to everyone will be the industry's priority rather than profiteering and pandering to corporate greed which leaves millions out in the cold.
Posted by Colin at 21:16 No comments:

Politics in Scotland has been utterly transformed in the past week as the long awaited referendum on Independence just got real.
The bells ringing in the New Year had barely stopped chiming when David Cameron strode into the BBC's London studios to declare he was taking charge of the Independence referendum. He insisted it would be conducted on his terms and at his choosing because 'the current uncertainty' over the timing of the referendum was 'destabilising the Scottish economy and bad for business confidence and investment decisions'. His intervention was designed to seize the initiative on behalf of the British state. Uncomfortable with their lack of control Cameron and the British state insisted that Westminster alone had the right to organise any referendum since constitutional matters are reserved to them under The Scotland Act 1998. In using these legal powers he insisted he had the right to see a simple Yes/No question on Independence be put as early as possible.
Cameron sees the current polls suggesting a 60:40 majority for staying within the United Kingdom, and wants any referendum held quickly before a stuttering economy, a populist SNP, or other events alter that ratio.
But Cameron's political weaknesses are all too apparent. The Tories and Liberal Democrats are hugely unpopular in Scotland. The former have just one MP out of 52 and, if anything, the Liberals are even more hated for having gone into coalition with Thatchers heirs.
On the Independence side, where stands the Scottish Socialist Party, the intervention of Cameron is seen as the hand of reaction. Alex Salmond astutely outmanoeuvred Cameron by announcing within hours that the date of the referendum would be Autumn 2014. The polls are seen as a challenge for supporters of Independence, one which can be turned around. And neither side would claim they are at this stage the final verdict of the Scottish people. Perhaps the most interesting of all the recent polls was the one conducted by Ipsos Mori in November which asked people how they would vote if they felt they would be £500 a year better off under Independence. The result was that the 60;40 proportions were completely reversed with a majority this time favouring change.
This news is no surprise to those of us who have argued for 10 years that convincing working people in Scotland that they will be economically, socially, politically and culturally better off if we were able to make our own decisions, control our own economy and shape our own destiny, is they key to winning a resounding Yes vote in Autumn 2014.
Posted by Colin at 22:19 No comments: 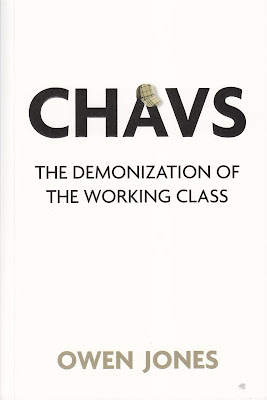 Zillah bought me a copy of ‘Chavs - the demonization of the working class’ by Owen Jones for Christmas. I realize the book has been out for a few months and many people have already seen the book and raved about it. I also acknowledge that Owen Jones was up in Edinburgh in November speaking at the Radical Book Fair organised by Tarlochan and Elaine at Word Power books. As I was contesting the election for Rector of St Andrews University at the time I missed the chance to meet him.

‘Chavs’ is a book I just couldn't’t put down. I read it from cover to cover in two days and was both angered and energised by it. Owen Jones articulates how working class people have been put upon by politicians, journalists and the chattering classes. Even the term itself has been besmirched, slandered and confused.

I am proud to consider myself working class. I have never seen myself as anything else and nor do I ‘aspire’ to. I was born and raised in the tough environment of a declining industrial town in Lanarkshire. Both my grandfathers were steelworkers although my grandpa Fox whom I barely knew had his life defined more by his experiences as a Japanese prisoner of war forced to work on the infamous Burma railway than by a blast furnace. He died in the early 1960’s but his cause of death had been ‘written down’ back in 1946. My grandpa Mackin was a foreman with the Lanarkshire Welding Company and built ‘most of the bridges in Scotland’ post war – and virtually single-handedly if you were to believe him. Both men were ambitious and determined to build a better life for their kids and grandkids like me.

I found myself both incensed and elated at ‘Chavs’ because it laid bare how millions of such working class people in Britain have been exploited and driven into poverty over the past 25 years and that during a so called ‘never-ending boom’, and then to add insult to injury they were made to feel as if the brutal and obscene failures of the system were their fault.

I had just finished writing a pamphlet for the Scottish Socialist Party on fuel poverty and the consequences of the exorbitant increases in gas and electricity bills when I read Chavs. And it made me go back to my pamphlet and stress the point, for the benefit of one million households in Scotland that the fuel poverty misery they are being forced to endure it is not their fault. This ‘blaming the victims’ culture must be defeated. These energy bills have gone up, income have gone down and energy efficiency schemes decimated because of a failure in the economic and social system we endure.

Our elected representatives, our mass media and the rest of system try to blame the victims of capitalism for its failings and let the real culprits off Scot-free.

CHAVS is a book every socialist should read just before they go out and rebuild the socialist movement in the schemes and communities across Britain. They truly are needed more than ever.


‘Chavs- The Demonization of the working class’ is published by Verso priced £14.99 and is available from Word Power Books, West Nicholson Street, Edinburgh.
Posted by Colin at 12:01 1 comment: