Guess what cuts in public services the Scottish Socialist Party will make? 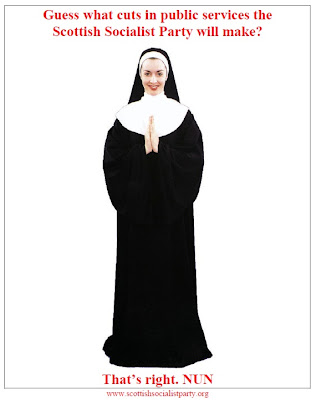 I was delighted to attend the Blindcraft lobby of Edinburgh City Council this morning particularly as it resulted in a partial success for the workers/campaigners involved.
The SNP Group backed down over plans to close the factory and send 70 blind and disabled staff onto the dole. Edinburgh City Council officials had prepared a report recommending closure. Their decision was based on trying to save £700,000 a year from the subsidies it presently makes to Blindcraft's Craigmillar operations. Late last night however the SNP Group, which runs the administration in coalition with the Lib Dems, decided to opt for short time working at the factory instead of complete closure. Their decision came after they had learned the Labour Group was to table such an amendment to the officers report.
So today at 9.30am we had the spectacle of both SNP and Labour Councillors leafleting the lobbyists -rather than the other way round- with details of the same amendment/alternative to closure.
SO why the eleventh hour change of heart by the SNP? Could their decision to move to a three day week for six months at the Craigmillar site be anything to do with the terribly damaging PR such a closure decision might bring and the imminent Scottish Parliament elections?
Either way the workers at Blindcarft and their union The National League for the Blind and Disabled/Community welcomed the reprieve. At least it lifts the immediate threat of closure they reasoned. However they are under no illusions they will have to return to a campaign footing after Christmas as they come to terms with 3 day working and gear up for the battle ahead. 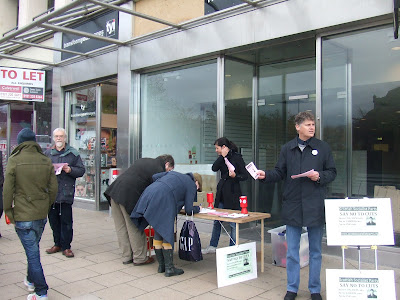 Both Edinburgh branches of the SSP have asked me to speak at public meetings they have arrange this month against the Governments public spending cuts.
The SSP is committed to public services. We see the current levels of public service provision to be inadequate to cater for the needs of the population and so we certainly will not support any attempt to cut back these services nor sack public sector workers. As far as I am concerned the Governments plans to hack £85bn off our public service budget and sack 500,000 public sector workers are utterly unacceptable. The naked class attacks by public schoolboys like Cameron, Clegg and Osbourne who want to make working class people pay for a crisis caused by greedy bankers must be resisted. As usual both New Labour and the SNP are about as much use as a chocolate tea pot. Instead of opposing the Tories cuts agenda both these parties propose alternative cuts of their own!
The greedy bankers and the rich refuse to accept responsibility for a crisis they caused and they wish to inflict severe pain on working people. My experience today campaigning on Princes Street against the cuts showed me the huge public opposition there is to this deceit of the bankers. Its not a question of will working people fightback against the unfairness of all this more a question of where it begins and when.
The SSP in Edinburgh will be taking our case to the public with open meetings in St Leonards on Thursday 18th November [7pm in Nelson Halls Community Centre] and in Leith on Monday 22nd November [7pm in the Kirkgate Community Centre]. Further details of speakers etc will follow soon.
Posted by Colin at 20:03 No comments:

Don't believe a word Kenny McAskill says, the Scottish Justice system doesn't get human rights. It ignores judgements of the European Court of Human Rights [ECHR] with abandon. I remember sitting in the Court of Appeal in Edinburgh in 2003 I think it was listening to the case Napier vs The Lord Advocate wherein a former remand prisoner at Glasgow's Barlinnie jail successfully argued that the Scottish Executive had breached his human rights by forcing him to 'slop-out' [urinate and defecate into a plastic bucket] despite a ruling some years earlier by the European Court of Human Rights that such practices were now illegal. Only the prospect of paying out tens of millions of pounds of public money in compensation to thousands of other prisoners led the then Justice Secretary Jim Wallace to finally end this sickening practice.
You would have thought that lesson would have taught Scotland's legal establishment they needed to comply with international human rights legislation but not a bit of it.
Last week a ruling in the UK Supreme Court in London summarily rejected pleas by the Scottish judicial establishment to deny legal representation to suspects held in police custody. The Cadder case forced Scottish Justice Secretary Kenny McAskill to introduce emergency legislation to the Scottish Parliament the next day - legislation, it must be pointed out, which the Scottish Human Rights Commissioner Professor Allan Miller was not even consulted on and which he believes actually makes things worse and is a further breach of ECHR articles. These new laws were not introduced by McAskill because he was keen to ensure everyone gets legal advice, no, they were hurriedly enacted for fear of millions more compensation being paid out.
This week - I wonder if you can see a pattern forming here - Scotland suffered its third European defeat when via Westminster David Cameron this time had to anounce that 70,000 citizens in Britains jails [including 7,000 in Scotland] would now have their democratic right to vote returned to them because the current practise of denying them it is another breach of ECHR.
Of course all this extension of human rights has been just the signal the reactionaries in the Tory Party, Labour Party and SNP needed to start screaming 'blue murder' about Europe interfering in our wonderful justice system. Aye right! No wonder so many people stress the need to get SSP MSP's back into Holyrood!

'The case for socialism' returns to Fettes

Three years ago I was invited to speak at Fettes College in Edinburgh the prestigious private school. I was asked to deliver a lecture on 'The case for socialism' to the schools 5th and 6th year pupils. As I recall I took my SSP colleague Johanna Dind with me as I was keen to show her round the 'alma mater' of our then Prime Minister Tony Blair.
Edinburgh has the dubious distinction, I remember telling her apologetically, of sending more of our youngsters to private school than any other city in Britain. The rest of the UK struggles to believe it but a quarter of all pupils here attend fee paying schools. I assure you it is true, 23% of primary and 25% of secondary school kids attend the dozen or more private schools like Fettes to be found here.
I always jump at the chance to present the SSP's case for socialism at schools throughout Scotland. As regular readers of this blog will know I particularly enjoyed speaking to students at my old school Our Lady's High in Motherwell this year. With private school visits I always feel like I am bringing news from the outside world.
This week I received another invitation from Fettes to return in February an give another lecture. Mr McDowall, the teacher who arranges my visit, was kind enough to say the first lecture was very popular indeed and he'd like me back to again deliver the case for socialism. It's certainly not something Tony Blair could do.
Posted by Colin at 19:18 No comments: