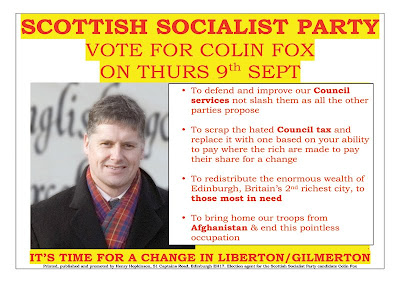 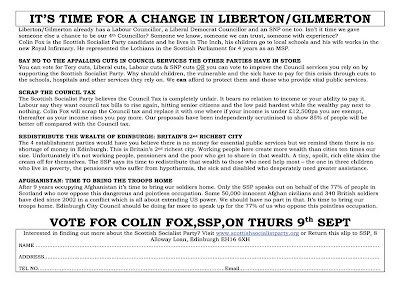 An Australian Republic and a Scottish one too

I was struck by this story on the radio and newspapers today.
'Australia should drop its ties to the British monarchy when this Queen dies and move to a republic' said Prime Minister Julia Gillard campaigning in Queensland today ahead of next weeks General election.
What a good idea and something Scotland should emulate.
Strange as it may seem the issue is highly contentious in Australia. Gillard's opponent in the election, Liberal Party leader Tony Abbot, is a staunch monarchist. He supports the existing constitutional arrangements which have, according to him, 'worked well in the past and can continue to work well in the future.'
I say strange because it highlights how much Australia, despite recent strengthening of relations with South East Asian, has not shaken off her colonial past.
It all reminds me of a speaking tour I undertook in Australia during November 2003 shortly after being elected to the Scottish Parliament. I was struck then how ridiculous that year's referendum on the monarchy must have seemed to millions of Australian Aboriginals, or citizens of Melbourne living within the world's second biggest Greek population after Athens, or the huge population from the former Yugoslavia to say nothing of the Irish. And in Sydney, Australia's biggest city, with its burgeoning Chinese and South East Asian communities, how ludicrous it must have seemed to hear how they should 'tug a forelock to the feudal Queen, her heirs and successors'.
In 2003 Australia's crafty monarchists were able to stir up more contempt for the new Constitutional proposals to counter the huge majority for a republic.
I remember telling audiences from Hobart to Brisbane that on behalf of the people of Scotland I was instructed to say if they wanted the Queen so much they could have her. They were mightily impressed by the 6 SSP MSP's refusal to swear an oath of allegiance before taking our seats at Holyrood.
Posted by Colin at 07:07 1 comment: 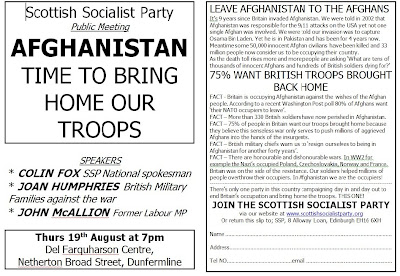 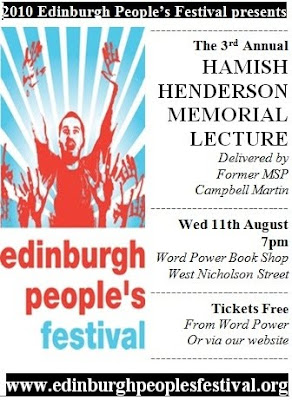 I am delighted to have been selected as the Scottish Socialist Party's candidate to fight the forthcoming City Council by-election in the Liberton/Gilmerton ward of Edinburgh.
I live in the area and have been an active campaigner here for the past 15 years. This ward is amongst the poorest in the city and it has been deprived of investment and support for many years. If Edinburgh is the second richest city in Britain then you wouldn't know it living in the Liberton/Gilmerton ward.
SSP activists were out across the constituency this afternoon delivering the first of our election materials. The by-election arises because the sitting Labour Councillor was elected as the MP in May.
Labour are hot favourites to retain the seat at this stage but it will be interesting to see how the SNP and Liberals do given the fact they run the City Council and have implemented many unpopular cuts in services in this area recently. Uppermost was their disgraceful decision to close Burdiehouse Primary School against the wishes of local parents and thus ripping the heart out of this already disadvantaged community.
Of course further interest will also focus on how much anger is directed at the Liberal Democrats for going into coalition with the Tories at Westminster. This by-election is the first test of public opinion since Clegg 'rowed in' with the Tories.
For the SSP the key issues will be our commitment to scrap the hated Council tax, to oppose the cuts agenda of all other parties and to re-iterate the need to distribute the enormous wealth Edinburgh has from better off to those most in need.
Finally the SSP will not shirk from making the withdrawal of British troops from Afghanistan a central issue in this election. I believe Edinburgh City Council could do much to reflect the democratic wishes of the majority in this area who want to see our troops brought home from Afghanistan and this pointless occupation at last brought to an ends after 9 years.
I am looking forward to pressing the socialist case in this by-election over the next 6 weeks and I am confident our message is increasingly falling on fertile ground.
I intend to keep regular readers of my blog fully informed of all the twists and turns in this selection.
Posted by Colin at 06:33 3 comments: