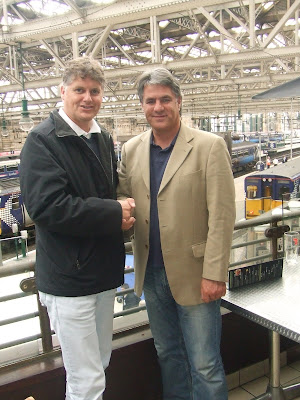 I'm delighted that Campbell Martin the former SNP MSP has joined the Scottish Socialist Party.
I have known Campbell for many years. We were both in the Scottish Parliament together as MSPs. He is a hugely talented socialist activist, widely respected and highly principled. He was expelled from the SNP in 2004 for speaking out against the party's move to the right under John Swinney. A path it has continued to plough under Alex Salmond.
I have been a huge admirer of Campbell's for many years. Like the SSP he is passionate about the need for an independent socialist Scotland. I am sure he will make a great impact in politics in Scotland. I am also sure there are many more people like him looking for a party which puts working people first and champions the case for an independent socialist Scotland, particularly as the country's economy continues to stumble, people's living standards continue to fall and inequalities widen. 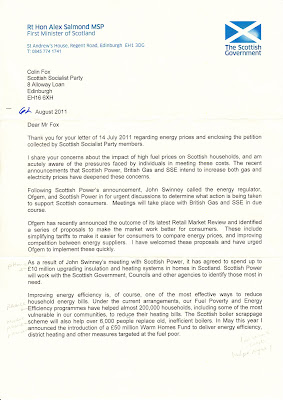 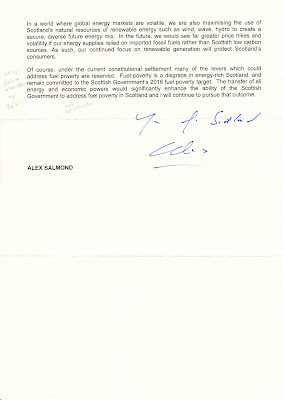 Here's the reply I received from First Minister Alex Salmond to my letter containing a 2,000 signature petition demanding action to eradicate fuel poverty.

I thought you should see it.

It arrived on the same day as Britain's Fuel Poverty Action Group told Channel Four News the governments figures on fuel poverty grievously understate the extent of the problem. Mr Derek Lickorish, Chairman of FPAG, revealed there are now 6.6 million households in Britain experiencing fuel poverty [defined as spending 10% or more of household income on gas and electricity] with more than one million of these in Scotland.

Scotland has a significantly greater problem pro-rata than south of the border. But Alex Salmond's letter, as you can see for yourself, offers cold comfort to those facing real hardship. His government, in common with his counterparts at Westminster, have cut funding to programmes aimed at reducing fuel poverty. Indeed the SNP made a cast iron commitment in 2007 to eradicating fuel poverty in Scotland by 2014, but this promise has now been abandoned.

The 'agreement' he refers to in his letter 'to spend up to £10million upgrading insulation and heating systems' is unfortunately a pittance in the circumstances. The average household bill for gas and electricity is now almost £1,500 so £10million, even if it was spent on the one million households in severest need, amounts to very little indeed.

Come on Alex, this isn't what you promised us and it certainly isn't what the people of Scotland voted for on May 5th! 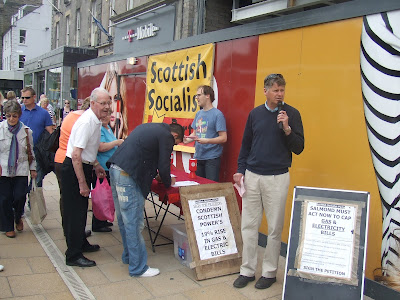 
Please find enclosed a 2,000 signature petition gathered by Scottish Socialist Party members in Edinburgh in the past few days expressing public anger at the escalating cost of gas and electricity bills. These signatures illustrate the depth of feeling that exists on this issue. With almost one million families in Scotland now suffering fuel poverty that anger has reached boiling point. Scottish Power, British Gas, SSE and Eon have increased prices by 19%, pushing the average bill for gas and electricity up to £1,500/ year.


This was not therefore the time for SNP Housing Minister Alex Neil to be cutting £20m from programmes designed to combat fuel poverty in Scotland. As if this ‘double whammy’ of increased prices and reduced Scottish Government support was not bad enough George Osborne has also cut the lifeline winter fuel allowance to pensioners by £100.


Our enclosed petition urges you to act now and to help those one in three households in Scotland in such dire need. It is time the bills were capped. Wages haven’t gone up, benefits haven’t gone up and pensions haven’t gone up, so power companies cannot be allowed to force more and more people into fuel poverty!


The people of Scotland demand you intervene to provide far greater help to those in need. Doubling the winter fuel allowance to pensioners would help, as would ensuring families on pre-payment cards get a discount rather than paying most for gas and electricity as at present.


I look forward to receiving reassurance from you that working people in Scotland will be given help by the Scottish Government rather than abandoned to market forces and rapacious multinational companies.