The charity Save The Children this week published a report disclosing that there are 90,000 children in Scotland living in severe poverty. That's 90,000 youngsters growing up in households where the income is less than £134 a week. So, when the fridge or cooker, washing machine, electric shower or gas fire breaks down it doesn't get fixed. These are the kids who can't afford to go on the weekend school camp to Abefoyle or Dunoon or even outings to the zoo, the museum, the sports stadium or the cinema. They are the ones who will not meet their educational or social potential. They will not be our future doctors or nurses, teachers or firefighters. One in three children in Scotland now live in poverty, 90,000 children - the equivalent of a city the size of Paisley - re punished for being poor in a country which is one of the richest countries in the world.

In Glasgow almost 20% of children live in severe poverty. What does this say about a city which is spending a small fortune on the Commonwealth Games? How bitter to see those children most in need of help from the 'common wealth' again be denied it.

To make matters worse Save The Children's research covered 2009/09. This means it does not take account of the current economic downturn. The rise in unemployment and the cuts to lifeline public services will have made matters even worse.

Save The Children is to be congratulated for bringing the matter to our attention but as a charity it's limitations as an agency of change are laid bare. 'The Scottish Government must' STC say, 'set out a clear commitment to end child poverty in Scotland'. Must they? STC admit the Government have done nothing about eradicating child poverty in 12 years. And of course it never will. Labour, the SNP, the Tories or Liberal Democrats don't give a damn about child poverty in Scotland. They all share the neo-liberal belief that rich corporations are the priority in this country. These political parties, all in the pocket of big business, argue that the rich must be allowed to pay miserable wages, exploit the poor and pay negligible taxes [as Barclays did this year - 1% tax on it's profit of £8 billion]

So STC 'milk the cow and kick over the bucket'. They highlight how terrible the situation is but plead with King Herod not to keep murdering the first born. Karl Marx observed that 'Philosphers have merely interpreted the world, the point however is to change it' - it is also thus with charities.

And so it is to those with no illusions in neo-liberal 21st Century capitalism that we must look for solutions to severe child poverty in Scotland. We owe it to all those 90,000 youngsters and the millions more who will follow to eradicate the causes of this blight in our society.
Posted by Colin at 09:02 No comments:

After speaking at Fettes College (the fee paying school in Edinburgh that Tony Blair attended) last week I now get the chance to meet pupils at my old school; Our Lady's High School in Motherwell.

This Wednesday's visit will be the third time I have been asked to address the pupils and I'm really looking forward to it.

Not only is Motherwell my home town and Our Lady's my old school but this is heartland territory for the Socialist movement. It is the birthplace of Labour's first leader - James Keir Hardie - and nearby lies the UNESCO World Heritage site of New Lanark. Here the Utopian Socialist Robert Owen established a world renowned cotton mill in the early 1800s with enlightened attitudes to work, education, health and social conditions. Motherwell also elected Britain's first Communist MP back in the 1920s, one of only four ever to win a seat at Westminster.

Those sSocialist pioneers believed in a democratic republic and, with two Royal weddings to suffer this year, it is surely time to remind people of the need for an elected Head of State to replace the feudal relic that is the British monarchy. The Socialist movement's founders firmly believed in putting the interests of the people ahead of those of rich aristocrats. Those beliefs are today carried on by the Scottish Socialist Party. The record of the modern Labour Party, on the other hand, is of course light years behind Keir Hardie, Robert Owen and other founders of the labour movement. Tony Blair, Gordon Brown, Ed Milliband and Iain Gray would be hard pressed to spell Keir Hardie, much less have anything in common with his views! They have long since turned their backs on such ideas in order to pursue their own privileges, high living and fat cat expenses. By contrast the SSP believes, as Keir Hardie and Robert Owen did, in the need to end exploitation and to provide full employment, decent wages and conditions, educational access for all, the redistribution of wealth and the establishment of a democratic republic.

Those values are as important today as they ever were. Lanarkshire once led the world in fighting for them. Now Labour's dismal record at local, national and UK levels would shame the county's progressive pioneers.

At Our Lady's High on Wednesday I intend to remind all the students of this past and to outline the case for an Independent Socialist Scotland today and a modern democratic republic.
Posted by Colin at 21:16 No comments:

SSP members across the Lothians will this week deliver 50,000 of these newsletters [below] as the first salves in our Holyrood election campaign. 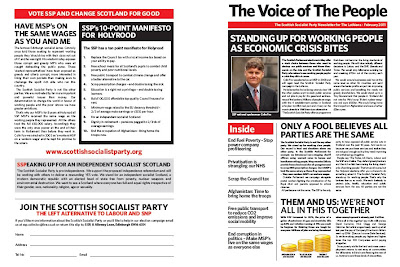 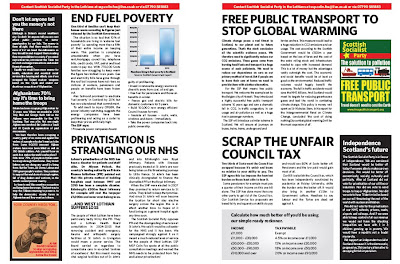 Today's announcement by Cabinet Secretary Sir Gus O'Donnell that the British Government did all it could to assist the release of the man convicted of the Lockerbie bombing adds further weight to the suspicion that the greatest miscarriage of justice in Scottish legal history involved the British state.
Why was Al Megrahi released?
The question brings forward many competing explanations. According to Sir Gus O'Donnell he was freed because British oil interests demanded it. He was handed back to Libya so that BP could gain access to their huge untapped oil reserves.
The SNP Government are apparently appalled at this suggestion and the inference they had any part in this grotesque affair. But there are those of us who think they doth protest too much!
Arguing, as the SNP do, that he was released because the Scottish Justice system is known for its compassion and humanity, recognised he had terminal cancer and wished to see him spend his last few days with his family, is of course utter twaddle. The Scottish justice system has no such qualms. And it is an insult to our intelligence to suggest it has. People die in Scottish prisons all the time. If the SNP believe he was responsible for the worst mass murder in modern Scottish history then why did they insist, as a condition of his release, that he abandon his legal appeal against conviction. His case was being sympathetically examined by the Scottish Criminal Cases Review Commission. The idea that such a reactionary outfit as the SNP would show him the mercy he apparently never showed his victims is offensive nonsense.
The truth is itb suited both the Scottish legal establishment - of which the SNP is part- and the British state to prevent the full facts of this case coming out. Al Megrahi's hearing was widely expected to conclude that this was, to put it mildly, an unsafe conviction. It is now a matter of public record that Scottish Justice Secretary Kenny McAskill met AL Megrahi privately in his cell in Greenock prison and told him he could have his his freedom only if he agreed to abandon that appeal.
So Alex Salmond may be absolutely right to accuse Gordon Brown of rank hypocrisy in regard to his public statements following the release of Al Megrahi. But he is equally guilty of such a charge. The First Minister Salmond is taking us for mugs if he expects us to believe he is not also complicit in covering up the worst miscarriage of justice in Scots legal history.
Officially the SNP believes Al Megrahi was responsible for the bombing of Pan AM 103.
Officially the SNP believes the Scottish Justice system reached its verdict in possession of all the facts. Officially they also believe the Scottish Justice system is based on values of compassion and humanity and that this is exercised so liberally that the man convicted of cold blooded killing 300 people deserves mercy in abundance.
This is the same SNP who opposed compensation to those denied their human right to toilets in their cells, to those denied a lawyer at police interrogations and against offenders having the vote. Are we really to believe they are so liberal and compassionate as their release of Al Megrahi suggests?
I accuse the SNP of complicity in this cover up. The worst miscarriage of justice in British legal history also denies the victims of Pan Am 103 and their families the justice they deserve and the SNP knowingly plays its part.
I sat on the Scottish Parliament's Justice 2 Committee between 2003-2007.
Posted by Colin at 21:34 No comments: