Out of conflict comes clarity

Not satisfied with bringing in 'scab' labour to try and break the binmens' industrial action SNP leader Steve Cardownie is quoted in the Evening News warning that the entire refuse service may be privatised.
It says a great deal about the SNP and the kind of alternative to New Labour they offer.
The bin men are poised to go on strike because this SNP/Lib Dem Council intends to take £6,000 off their already low wages. The bin men deserve our full support as they rightly rejected the Councils outrageous interpretation of the Equal Pay Act which involves savaging the pay of low paid male workers rather than increasing the wages of their even lower paid female colleagues. 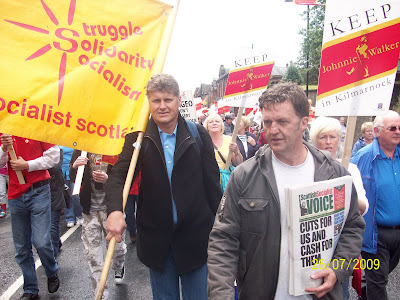 Around 10,000 people marched through the centre of Kilmarnock today in protest at the decision by Diageo, the world's biggest drinks company, to close their Johnnie Walker whisky factory in the town with the loss of 700jobs. Johnnie Walker, the world's most popular whisky brand, has been produced in Kilmarnock since 1820. Diageo made £2bn profits last year, including those at its Kilmarnock factory but recently proposed to close the plant and move the bottling plant to Leven in Fife with the loss of 900 jobs in order to make even more profits. If this decision goes ahead it will be a hammer blow to the town of Kilmarnock with unemployment rates expected to double overnight. The Scottish Socialist Party joined the protest and pledged our full support to the communities fight to keep these jobs in Kilmarnock.

The Scottish Socialist Party received a call from David Cameron last week.
But this wasn't the David Cameron born with a silver spoon in his mouth who went to Eton or votes Tory. He is a bin man with Edinburgh City Council and has been for 21 years. David contacted us to ask for help after the Council's SNP/Liberal administration informed him and 600 of his colleagues their pay was to be 'modernised', by chopping £3,000 a year from it. Bin men like David earn £16,000 including bonuses. Management aims to take £70 per week off them.
Council leaders insist the cuts are necessary if they are to implement the 'single status' agreement in the Equal Pay Act. This Act, passed into law three decades ago but not fully implemented, affords women workers the same rights as men by insisting that work of equal value be equally rewarded regardless of gender. The Scottish Socialist Party supports this principle wholeheartedly, however we, and the rest of the labour movement for that matter, are determined that wages are 'equalised up' not down. In other words it must mean a substantial pay rise for women not a cut for men.
In a ballot result announced last week David Cameron reported that the 600 bin men in Edinburgh had voted '599 to one' to strike against the proposed wage cuts. He further explained that the workforce had begun a 'work to rule' refusing overtime or taking up shifts on their days off.
The union believes the ballot result puts the ball firmly in the Council's court. The prospect of rubbish piling up in the city's streets with temperatures, as we have seen this week, into the 80's and with 200,000 visitors heading here for the Festival will put the SNP/Liberal coalition under huge pressure to back down.
Meanwhile I have written to Stephen McGregor, TGWU Unite shop steward pledging the Scottish Socialist Party's full support for the union. I added that as far as I was concerned bin men earning only 2/3rd of the average wage was an inadequate level of pay for the important and yet dirty job they do in serving our communities across this city.
Posted by Colin at 18:27 No comments:

People’s Festival launches £1,000 visual arts competition with Richard Demarco to judge entries.
Visual Artists (including photographers) across Scotland are invited to submit wall mounted work on the theme ‘Let The People Speak’.
Entries will be exhibited at the North Edinburgh Arts Centre in August as part of the 2009 Edinburgh People’s Festival.
Posted by Colin at 17:43 No comments: