Time To Abolish The Council Tax - Not Freeze It

The opinion polls suggest Labour and the SNP are neck and neck in the race for Holyrood 2011. Interestingly both parties now support a freeze in Council Tax bills for the next year. They arrived at this 'freeze' via different routes however.

Like the Scottish Socialist Party the SNP are opposed to the Council Tax in principle, believing, as the majority of Scots do, that it is unfair and hits the less well off disproportionately hard. The Council Tax is indeed a regressive tax that bears no relation to a person's income. Consequently the least well off are hit hardest as the wealthy pay coppers. Since they have not been able to replace it with an income based alternative, the SNP have settled for second be stand 'freezing' the current charges.

Labour on the other hand has no principled objection to the Council Tax. They argue for a freeze on the grounds that they purportedly want to 'help hard working families in this time of austerity'. Most people believe that it has more to do with avoiding being politically outmanoeuvred by the SNP. Either way freezing the Council Tax does nothing to address it's fundamental unfairness. Indeed it may be argued a freeze helps the rich most of all.

As things stand the wealthy in Scotland pay a tiny tiny percentage of their income on this bill. For example,Stephen Hestor (the CEO of RBS) was just awarded a £7.7 million pay package for the coming year. Living in Edinburgh his Council Tax bill will again be frozen at £2,338 or 0.03% of his salary whilst some pensioners are paying 25% of their income on theirs.

The Scottish Socialist Part believes this is utterly unacceptable and this week we will highlight our fully costed proposals for a local income tax to replace the Council Tax. Our plans would mean the burden would be lifted from the shoulders of of pensioners, low paid workers and the poor and at the same time force the wealthy to pay their fair share for a change.

Economists at Paisley University who scrutinised these figures found that 77% of Scots will be better off compared to now. Furthermore, using the latest Her Majesty's Revenue and Customs figures, they are able to demonstrate that these proposals would bring another £1.5 billion into Holyrood's Treasury.

So, not only would this tax be fairer and redistributive, it would also halt the need for any cuts to public services in Scotland. And that's a freeze we DO need.
Posted by Colin at 10:32 5 comments:

For a Modern Democratic Republic 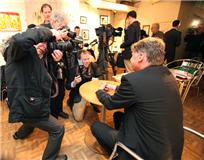 The Scottish Socialist Party launched our manifesto for the 2011 Holyrood elections yesterday at a press conference in Glasgow. With me at the launch were the other top of the list candidates from across Scotland. Frances Curran (Glasgow), SSP Councillor Jim Bollan (West of Scotland), and myself briefly outlined the main points in our magnificent manifesto [which can be downloaded from the SSP website] for the assembled press pack.
We gave the people of Scotland a cast iron guarantee that if they elect SSP MSPs on May 5th we will not vote for cuts to public services, to jobs, wages or conditions. This is a very important commitment because this will be the first Parliament faced with a reduced budget so MSPs will either vote for cuts or fight them.
The SSP has never, in twelve years, voted to cut public services or the standard of living of working people and we have no intention of starting now.
Second we stressed that we are committed to scrapping the hated and unfair Council Tax. We intend to replace it with an income based alternative which sees the wealthy pay more and the poor exempted.
And last, but by no means least, is our support for an independent socialist Scotland, a modern democratic republic. Whilst other parties dilute their commitment to independence we remain passionate about it. And as we will endure the sycophants cooing over a Royal wedding in the last week of this election campaign we felt it important to restate our commitment to a modern democratic republic for Scotland.
The press conference was well attended as the picture shows. As well as the BBC and STV film crews, several other photographers and journalists were present and their questions reflected their growing recognition that support for the SSP is increasing noticeably.
The coverage of our manifesto launch has, as usual, been patchy; some good, some bad, some non-existent. STV news carried a full interview and the greatest column inches were found in the Aberdeen Press and Journal. So, hats off to them for fair coverage and Dunces Caps to the BBC, The Daily Record and the other tabloids for ignoring us once again.
Posted by Colin at 21:14 No comments:

After my election to Holyrood in 2003 I launched a Private Members Bill to scrap prescription charges. The SSP's Bill won the backing of hundreds of health groups, unions and patients groups across the country. It even won the support of the Scottish Parliament's own Health Committee.

It was voted down by an unholy alliance of Labour, Lib Dem and Tory MSPs, otherwise this double tax on the sick would have become law 6 years ago.

I am delighted nonetheless that our visionary idea has, at last, been realised and that a great injustice has been eradicated. The NHS promised, back in 1947, to provide health care free at the point of need paid for out of general taxation. Prescription Charges broke that promise to patients. Without our Bill, and the SNP Government's decision to pick it up, prescription charges would be £7.40 per item today as they are in England.

This achievement shows the people of Scotland what a difference SSP MSPs at Holyrood make to their lives, and in particular, to those of the low paid, sick and vulnerable. I hope people will remember this on May 5th.
Posted by Colin at 21:17 No comments: