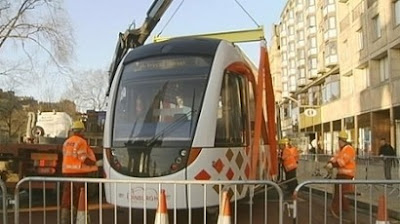 The opening of Scotland’s newest motorway yesterday under budget and ahead of schedule, makes painful viewing across the country in Scotland’s capital.

At roughly the same time Glasgow decided to plough ahead with a further 6 miles of the M74 to ease its traffic problems Edinburgh opted for 6 miles of tramlines. Unlike Glasgow the Edinburgh project has grossly exceeded its budget, up from £545m to around £770, is still years behind schedule and is now much reduced in scale from the original plan.

The budget failure and delays are bad enough but it is the utter incompetence of the project management TIE [Transport Initiatives Edinburgh] that has most disgusted people here. After 5 years of disruption, upheaval and contractual conflicts officials from TIE this week supplied Councillors with three options for the future and scrapping the entire scheme altogether- at a cost of £750m- was one of those choices. That’s right, we can choose to spend three quarters of a billion pounds and have nothing at all to show for it!

And it is a strong sign of the antipathy felt towards TIE and the entire project that 37% of people voted in an Edinburgh Evening News poll for that very option.

This issue is set to dominate next years Council elections and the recriminations are flowing thick and fast. The SNP blame Labour for coming up with the tram idea in the first place. Labour in return blame the SNP/LIB Dem coalition in charge of the City Council for the past 4 years of abject incompetence. In truth all 58 Councillors stand condemned as none of them were on top of the project as it veered off course.

And lest anyone think this doesn’t affect those living outside Edinburgh think again because £500m of the initial £545m budget comes from the Scottish Executive. They also face an additional extra demand.

I support trams in principle. I can see the merits they offer in cutting down congestion and CO2 emissions. I have travelled on the very successful and popular tram networks in Sheffield, Manchester and Croydon. But the problem with the Edinburgh scheme is that it was demanded by the city’s ‘business community’ not the people. Business leaders wanted to get to the airport quicker without having to use the bus. For the overwhelming majority of Edinburgh’s population the tram line network offered doesn’t come anywhere near us.

Furthermore the priority for Edinburgh is not a tram, regardless of whether it is £545 or £770. The people of this city need public housing, help with education and training, jobs and economic support as well as better health care. So as well as condemning the city fathers to charges of incompetence the tram fiasco also shows them to be completely out of touch they are with the real needs of the people of this city.
Posted by Colin at 17:13 No comments:

Democracy or the House of Lords

It's perhaps only natural that the debate on the Governments Bill to reform the House of Lords should further illustrate how out of touch our Peers of the realm remain. When the Tories are cast as the defenders of democracy you can tell how ridiculously skewed the debate has become.

David Cameron proposes that 80% of the House of Lords should be elected. And you might be forgiven for thinking the controversy centres on why only 80%? After all we don't elect 80% of the Commons do we or our Holyrood Parliament or our Councils? But this is no ordinary conflict. No, the Labour Party is against any elections at all!

There are many political issues where you would be hard pushed to spot any difference between Labour and the Tories.They are almost identical and reactionary on imperialist wars, privatisation, neo-liberal globalisation,savage public spending cuts, assaults on the living standards of working people, pensions, political corruption and nepotism. I could go on and on but here's one issue where Labour is substantially more reactionary than even 'the blue rinse brigade'.

In the past the Tories defended hereditary peerages and argued against an elected second chamber. This way they kept their inbuilt and substantial majority there. Labour meanwhile, for almost a century, rightly called for the abolition of the House of Lords. Now in a complete reversal of positions the Tories support democratisation, albeit partial, and Labour opposes it.

Labour's position is almost unbelievable. Ed Milliband's opposition to an elected second chamber is, like Blair and Brown's before him, based on the spurious argument that the power vested in the House of Commons would be undermined by other politicians given a mandate by the electorate. Labour wants to keep an appointed House of Lords in order to prevent it becoming a bulwark against decisions taken by the Commons.

You might think extending democracy would be a better argument, but no. And the Liberals are no better. I heard the preposterous Lord Steel of Aikwood argue on Radio Four this morning, that the public do not want 'politicians appointed by political parties sitting in the upper House'. This from David Steel an old buffer who picks up his £350 per day having been leader of the Liberals and appointed by Tony Blair on a grace and favour basis for service to the corrupt political establishment.

Countries all over the world have bicameral Parliaments with two elected chambers. The extension of such democracy would undoubtedly be a good thing for Britain but of course it rightly sounds the death knell for the nonsensical privilege and unelected placemen and women in the House of Lords.If you think the composition of the House of Commons is completely unrepresentative of the British population, and it is, the House of Lords is another world of aliens altogether.
Posted by Colin at 22:52 No comments:

Scottish Power has just announced a 19% rise in gas and electricity bills -the whole country is up in arms at this latest hike in charges - and it's likely it will not be the only energy company to do so. But with one in three Scots families already in fuel poverty [up from 293,000 in 2002] the situation is now critical.

Gas and electricity charges have risen more than 80% in 3 years. The average household bill is now over £1,500 a year and Scottish Power wants to raise them by another £200. The SNP Government promised to eradicate fuel poverty in Scotland by 2014. This pledge now lies in tatters.

Well they are not on. This really is the last straw.In the long term the Scottish Government must step up investment in renewable energy in order to diversify away from gas, oil and coal. Taking the power companies back into public ownership must be a priority, in order to ensure the profits this industry makes from the public benefit everyone. But people cannot wait that long, Alex Salmond must act now to cap gas and electricity bills and say enough is enough.
Posted by Colin at 22:49 No comments: 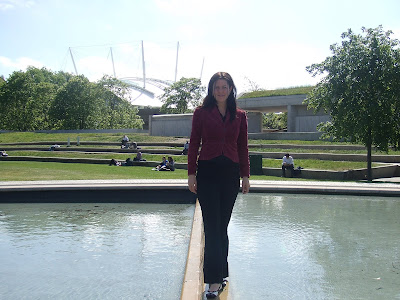 Sadly the Scottish Socialist Party had to say a fond farewell to our dear friend and comrade Karly Oliver [appropriately shown to the left] who this week has returned to her native New Zealand after 2 years with us here in Edinburgh.
Karly was a fantatstic comrade, the branch secretary of the SSP's Edinburgh North branch. She is a highly talented young woman who helped steer the SSP in the city through some fairly rough times. And she always did so with patience, diplomacy, utter professionalism and dedication to the cause she loves.
Karly was a joy to know and to work with. She will be much missed here, fondly remembered and above all warmly welcomed back because of the outstanding contribution she made to advancing the socialist cause in Scotland. New Zealand's gain is our great loss. To all my Kiwi comrades I say 'You have won a watch there, make sure you take good care of her.'
Posted by Colin at 22:12 No comments: