When I heard that the UK Parliamentary Standards Authority was about to award MP’s another £200 a week and take their salaries to £76,400 [or £1,500 a week] it was James Connolly I thought of first. I always do in these circumstances.
For it was the legendary Edinburgh socialist, executed by the British for his part in the Easter Rising in Dublin in 1916, who advised those seeking to represent working people to ‘rise with your class not out of it.’
It always struck me as the essence of ‘representative democracy’ that those ‘representatives’ should live on the same pay and in the same conditions as those they were elected to serve. So, when the wages of their constituents rise to £76,000 then MP’s will be entitled to the same. Meantime since the average wage in Scotland today is £25,600 that’s what our MP’s/MSP’s should receive.
I suspect that all the crooks and corrupt timeservers who inhabit the Parliamentary benches today and throughout the ages would have a heart attack at the thought of living on the same salary as their constituents. So I suppose that’s another good reason for supporting this policy!
And before anyone pessimist says ‘workers representatives on workers wages are a fine idea, but no one would do it in practice.’ I'd point out that the Scottish Socialist Party MSP's did.
Proving again that the SSP is different from all the other parties our MSP’s were elected on a promise to be ‘workers MSP’s on workers wages’. And we kept that promise throughout all the years we sat at Holyrood.
As the duly elected MSP for the Lothians for example my Parliamentary salary was £55,000. Each month I took half of it – since the average wage of the people I represented was £23,000 – and for 4 years I gave the other half back. No other MSP’s followed our example.
Mindful of Connolly’s counsel our conduct showed how different we were, that we were motivated goals far greater than financial gain.
The SSP believes that in a truly representative democracy all MP’s are duty bound to live as their constituents do. It would certainly make them far more impatient for progress and improvement.
Today, MP’s are held in very low public regard. They are all seen as self-serving, corrupt and greedy. With the average wage £25,600 MP’s now want three times as much!
And as working people are being hammered by the worst recession in 80 years it ill behoves MP's to seek this rise. I am sure I am not the only one disgusted at the sight of those same MP’s who voted to slash £35/week off the housing benefit of those affected by the bedroom tax granting themselves another £10,000 per year.
The Scottish Socialist Party advocates real democracy, where ‘workers representatives are on workers wages’. This sets us apart from all the others. And there is no doubt this policy enjoys widespread popular support. Perhaps it was the reason for the headline in last weeks Metro, which loudly proclaimed ‘It's time to bring back the SSP’.Too right it is.
Posted by Colin at 21:54 No comments: 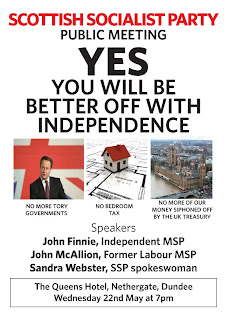