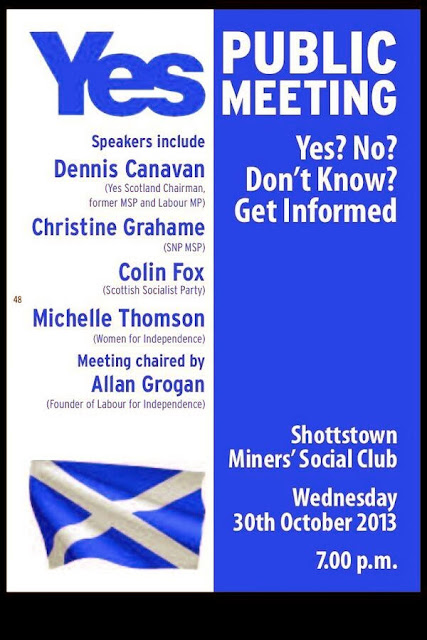 The Scottish Socialist Party will this week publish our latest pamphlet to 'End fuel poverty and power company profiteering'.
As well as exposing the shocking extent of fuel poverty in Scotland today and the greed of the profiteering energy companies it also includes full details of the Scottish Socialist Party's 8 point progamme to solve the problem, to:
-Cap gas and electricity bills immediately with no further rises permitted until fuel poverty is eliminated
-Investigate the big 6 energy companies on charges of profiteering and acting as an industrial cartel
-Double the Winter Fuel Allowance paid to the elderly and extend it to all other vulnerable groups
-Introduce a windfall tax on the big 6 energy companies profits to ensure all their existing 'powercard' customers are moved on to the cheapest tariffs instead of the dearest
-Diversify away from expensive and dirty fossil fuels used in the generation of electricity towards renewables
-Treble the sums spent on Government domestic energy saving schemes such as insulation, double glazing and efficient water boilers
-Build 100,000 new energy efficient new homes for the socially rented sector in Scotland annually to replace the worst of our current 'drafty, leaky and inefficient' stock, and
-Return the energy industry to public ownership to ensure every home has the heating they need and any profits go to the public purse.

The pamphlet will be available for £3.99 incl. post and packaging via this blog or from the Scottish Socialist Party website www.scottishsocialistparty.org 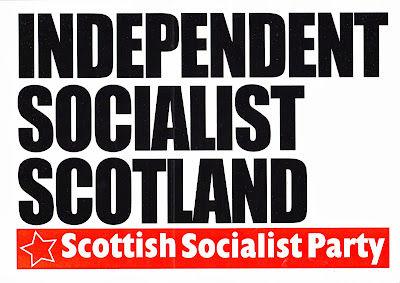 FOR AN INDEPENDENT SOCIALIST SCOTLAND Colour Posters A4 size 50p each

FOR AN INDEPENDENT SOCIALIST SCOTLAND Colour Posters A3 size £1 each

Booklet - 'The case for an Independent socialist Scotland' - £3.99

[All prices include postage and packaging]

Payments can be made via PayPal using the email entry ssplothians@yahoo.co.uk

For an Independent socialist Scotland

This article appears in todays Morning Star newspaper
Data from the 2011 UK census revealed last week that 67% of Scots describe themselves as ‘Scottish, not British’. And whilst 19% felt ‘Scottish and British’ only 8% saw themselves as ‘British’ alone. These divisions are most pronounced among the working class.
Those who see the British working class as a monolith whose practical unity is somehow jeopardised by Scottish Independence might wish to reflect on these sentiments for they inevitably pose the question where lies the unity of the British working class when so few of us, North of the Border, consider ourselves to be ‘British’ at all?
This ‘Scottish not British’ working class faces its most important political decision in decades. The Independence referendum next year poses a stark choice between continuing to be governed from London by parties who have no democratic mandate here with a programme detrimental to our interests or opting for self-determination and the chance to construct the left of centre social democratic country the vast majority of people here currently desire.
The Scottish Socialist Party advocates the latter choice and we have just published ‘The case for an Independent socialist Scotland’ which I would thoroughly recommend to all Morning Star readers with an interest in the political situation North of the Border. *
For the SSP Independence represents a step towards socialism in Scotland. And our new pamphlet reminds readers that supporting the rights of nations, like ours, to self-determination does not make you a nationalist it makes you a democrat. After all John Maclean wasn’t a nationalist was he? Nor were James Connolly or Lenin and yet each advocated this basic democratic right.
The biggest concern facing most working class Scots today however is not the constitution per se but the fall in their living standards caused by the worst recession in 80 years. As bills rise and rise and their incomes fall they increasingly see Independence as the best opportunity they have to avoid the recessions devastating consequences.
And the ‘Yes’ message is that it stands to reason that if all the oil money, taxes, levies and duties raised in Scotland remained here instead of being siphoned by the UK Treasury we would be better off and better able to address the deep rooted social problems we face. The latest figures published by HMRC for example show that Scotland raised 9.8% of total UK taxes last year with just 8.4% of the population.
If we accept Scotland would be better off with Independence attention then focuses on how that extra wealth will be distributed and what difference self-determination will make to the lives of working class people?
Last week I spoke on behalf of ‘Yes Scotland’ at a Communications Workers Union seminar for Scottish branches where these issues were ‘front and centre’ so to speak. With Labours Ian Murray MP representing the ‘No’ campaign we debated whether Independence is the progressive option for Scotland’s trade union members and their families? I pointed out that the privatisation of The Royal Mail would not have happened with Independence as the overwhelming majority of Scots are opposed to it. The same can be said about the hated bedroom tax. When one branch delegate then asked me what particular advantages I thought Independence would bring activists like him I pointed out that as most Scots are pro-trade union this majority might then be mobilised to rescind the UK’s appalling anti-union laws. Ian Murray was forced to concede that Labour has absolutely no intention of scrapping these draconian laws if elected in 2015. Nor will they take The Royal Mail back into public hands. Nor will they scrap Trident. Nor will they restore public services slashed by this Con-Dem Government.
Like many other unions the CWU in Scotland is now embarking on a series of consultation meetings with their members over the Independence referendum. And it is not difficult to see why more and more Scottish trade union members are opting for Independence as the progressive option in this debate.
Whilst the SNP and New Labour are both economic neo-liberal, capitalist parties the nationalists are to the left of Lamont and Miliband on social policy.
To pretend as some do that New Labour offers a progressive alternative in Scotland today is just not supported by the facts. Labour opposed the abolition of NHS prescription charges here [which the SSP did so much to pioneer] and now their leader Johan Lamont condemns universal benefits, that ‘non-means tested’ touchstone of the progressive movement in Britain, as representing ‘the something for nothing culture’!
Scottish Labour also support 90% of the CON-DEM public spending cuts here. And they advocate spending up to £100bn on a second generation of Trident nuclear weapons based at Faslane on the Clyde. Therefore to suggest that electing Ed Miliband as Prime Minster, enthralled as he is to the City of London, offers the route to a social democratic Scotland lacks credibility. And this growing realisation is playing a larger and larger part in the Independence debate.
* ‘The case for an Independent socialist Scotland’ is available from the Scottish Socialist Party, Suite 370, 4th Floor, Central Chambers, 93 Hope Street, Glasgow, G2 6LD. Priced £5.00 [including P&P]
Posted by Colin at 21:29 No comments: