The resignation of Major General Andrew Mackay, Officer Commanding Scotland, Northern Ireland and Northern England, last week in protest at military equipment and personnel shortages in Afghanistan surely puts into sharp focus the Taleban's most powerful weapon, its support from the native population. The insurgents haven't a fraction of the equipment Major General Mackay had at his disposal and yet they have kept the most powerful armies in the world at bay for eight years now. How can that be?The US and British military high command are fully aware that the overwhelming majority of Afghans deeply resent the presence of an alien army from the other side of the world and have done so for the best part of a decade. It is therefore delusional to suggest that pouring in ever more soldiers and military hardware will alter that basic fact or lead to victory for this unwarranted aggression.That's why the Taleban are winning the war in Afghanistan and why both US General McChrystal and British General Sir David Richards are now openly contemplating defeat.

I am looking forward to seeing Michael Moore's new film 'Capitalism - A Love Story' which is out soon. The movie exposes the naked greed, corruption and violent injustices of American capitalism in the way only Michael Moore can, this time in relation to last years worldwide banking collapse.
The film has been described by those who have already seen it 'as Moore's best work yet' so it should be good. Whether he wins another OSCAR or not remains to be seen but the film will certainly be watched by hundreds of millions of people around the world.
With that in mind I thought about pointing out - using a visual medium this time - the important complementary role which people like Michael Moore play on the one hand and groups like the Scottish Socialist Party play on the other.
Posted by Colin at 21:30 No comments: 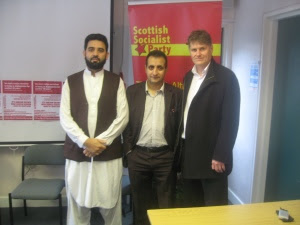 Picture taken at Edinburgh University SSP Society open meeting on Afghanistan with Mohammad Asif in the centre, Mr Wahid on the left and myself.
Posted by Colin at 15:26 No comments:

An Afghan refugee will join Scottish Socialist Party leader Colin Fox in calling for British soldiers to be withdrawn from Afghanistan at a meeting in Edinburgh tomorrow.
Mohammad Asif, chairman of the Scottish Afghan Society, will tell students at Edinburgh University that his countrymen bitterly resent the presence of British soldiers in their lands.
He said: "Afghans see Britain and America illegally occupying our country for the past eight years and we want them to leave immediately.
"Mr Fox said opinion polls showed a majority of Britons also want to see the troops brought back home. The open meeting starts at 1pm in Room G.02, William Robertson Building, George Square.

This article appeared in the Morning Star newspaper on 23/9/09.
At the same time as Alex Salmond was presenting his Governments legislative programme for the coming year to the Scottish Parliament, including as it does the Bill for a referendum on Independence, undertakers were presenting two corpses to the army for burial. Twenty four year old Kevin Elliott from Dundee and his comrade Stuart Millar from Inverness were killed in a war 60% of Scots don’t support.
Labour, Tory and Liberal Democrat MSP’s far removed from the hell that is Helmand province, lined up to denounce Salmond’s referendum as ‘an irrelevance’. Labour leader Iain Gray said it was ‘constitutional vandalism, an unwelcome distraction from the job of fighting the recession’. Annabel Goldie for the Tories accused Salmond of ‘posturing’ and Tavish Scott dismissed it as ‘being more about the SNP’s internal politics’ than anything else.
As ever in politics it pays to look at the context of any debate. Scotland is a nation which has repeatedly made it clear that, left to its own devices, it would not have troops fighting, and dying, in Afghanistan. Yet we are not afforded a referendum on that choice. Scotland also asserted its opposition to the war in Iraq but got no referendum then either. Our opposition to nuclear weapons based on the Clyde and our opposition to the monarchy is similarly ignored.
Scotland’s political ‘centre of gravity’ has been to the left of New Labour for some time. The SNP have exploited this fact in recent years. People rejected PFI but New Labour pressed ahead and privatised schools, hospitals, prisons and council housing. Scots favour redistribution of wealth and public ownership but the party of neo liberalism rejected these values.
Salmond argues that the referendum is no dry constitutional argument and he’s right.
This is about democracy itself and Labour in particular is in a complete ‘fankle’ on the issue. Iain Gray’s predecessor Wendy Alexander claimed, during her brief and ineffectual spell at the helm, that Labour would welcome a referendum. ‘Bring it on’ she goaded Salmond famously, believing voters would reject Independence outright. She calculated this tactic would ‘shoot Salmond’s fox’. In the end the only thing ‘shot’ was poor old Wendy herself, forced to resign after a Parliamentary Committee found her guilty of tawdry financial misdemeanours.
Yet the argument for the referendum remains potent, ‘Let the people decide’. Those who deny Scots their say risk being branded ‘democracy deniers’ by voters.
Of course there is a legitimate concern within the left that the ‘break up’ of the UK could weaken the working class movement as a whole in these islands. But it need not be so. Our movement has never moved at the same pace throughout Britain throughout history. The important advances made by working class activism in East London, Merseyside, South Wales, Clydeside, Yorkshire or the North East for example in the 20th century didn’t hold us back from developing general unions, the shop stewards movement, advancing women’s suffrage or defeating the poll tax.
The Referendum may not happen at all if MSP’s vote the Bill down but the wider Independence debate will continue nonetheless and in an altogether different atmosphere if, as seems inevitable David Cameron wins the Westminster General Election. This outcome will inevitably lead to yet another ‘democratic deficit’ for Scotland. It was just such a painful and enduring experience under Thatcher which ultimately forced the arch-centralist Tony Blair to concede a Scottish Parliament in 1997, an assembly he famously and accurately described as having all the powers of a ‘parish council’.
The Scottish Socialist Party supports a referendum on Independence because we believe the voice of the people should be heard after an informed debate with the option of Independence thoroughly evaluated. We will campaign for a ‘yes’ vote because we believe the break up of the British state to be a thoroughly progressive step. Let’s not forget this is the state which as well as leading us into senseless wars in Iraq and Afghanistan, is also the 4th largest arms exporter in the world, with its own nuclear ‘weapons of mass destruction’ based on the Clyde, which has been at the forefront of neo liberal exploitation worldwide and maintains the worst anti trades union legislation in Western Europe. The ruling classes in Britain vehemently oppose any diminution of that power. We should not.
The Scottish Socialist Party is convinced working people and the poor in Scotland, the strongest advocates for Independence today, will be economically, socially, culturally and politically better off if we are able to determine our own future. We believe that the question should now be put.
Posted by Colin at 20:49 No comments: 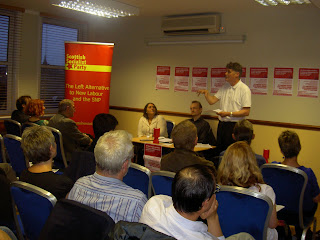 Picture taken at the public meeting on Afghanistan with Rose Gentle from Military Families Against the War.