For an independent socialist Scotland 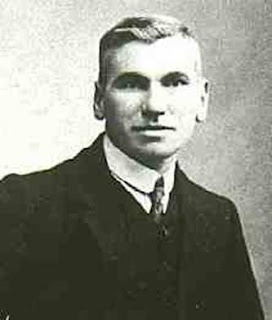 Letter to Newspapers on Afghanistan 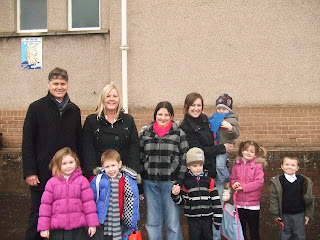 Council’s case for closure full of holes
Parents in Burdiehouse feel understandably betrayed by SNP and Liberal Councillors who were elected in May 2007 to oppose cuts in services and who now plan to close 4 city schools.
After 20 years of Labour cuts people voted for change. SNP/Lib Dem councillors were not elected to close Burdiehouse Primary or any other school. Furthermore their case for closure is weak.

WRONG, WRONG and WRONG AGAIN
Marilynne McLaren, the Council’s Education Convenor, claims the city hasn’t got the money to keep Burdiehouse primary open -Wrong.
Edinburgh is the 2nd richest city in Britain. Edinburgh Council is spending £500m on trams. Go get the money Marilynne!
She claims there are not enough children in the area to make the school viable – Wrong.
If she stopped telling people that Burdiehouse was about to close parents would not send their children elsewhere. And with the birth rate growing in Edinburgh school rolls will increase soon Furthermore 25% of youngsters in the city go to private schools. Marilynne McLaren sent her own children to private school! So she is wrong to suggest there is somehow a shortage of kids!

WHICH IS THE ONLY PARTY TO HAVE CAMPAIGNED AGAINST SCHOOL CLOSURES IN EDINBURGH THESE PAST TEN YEARS?
Labour? The Tories? SNP ? Lib Dems? No, no, no and no again!
They all voted for them. Indeed Labour’s record is the worst of all. You might want to remind Nigel Griffiths of that when he hands you his ‘Stop the SNP/Lib Dem cuts’ leaflet. What he is actually saying is ‘How dare they make cuts! That’s Labours job!’

ANSWER, SCOTTISH SOCIALIST PARTY.
We are proud of that fact. The SSP joined with parents at Lismore Primary in Bingham in 2004 for example to defy the closure plans of Ewan Aitken and his Labour Council. And they won a famous victory. We can win another one in Burdiehouse.
We oppose the closure of schools like Burdiehouse because to us they are the heart of local communities. If people here want the school to stay open then that’s good enough, that’s democracy after all.The school belongs to the local community, we pay for it

Our Case for keeping Burdiehouse Primary Open:
It achieves very good educational standards
Smaller class sizes are a good thing for our children’s education
It’s what local people in Burdiehouse want
Edinburgh’s enormous wealth must be shared out much more evenly and fairly. That means investing IN Burdiehouse not taking AWAY vitally important assets like the Primary School.
Posted by Colin at 07:04 No comments:

BRING HOME THE TROOPS. Afghanistan belongs to the Afghans 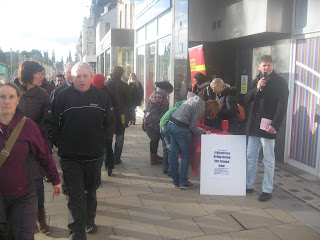 NATO Defence Ministers meet in Edinburgh next Saturday. Stop the War Scotland, Scottish CND and the Scottish Afghan Society have organised a protest march calling for them to stop occupying Afghanistan. I will be there and I urge you to join me.
With the appalling death toll for Afghan civilians and British troops alike showing no signs of abating next Saturday's march takes on even more significance.
I am calling on all SSP branches and members to come along, to bring their party banners and to show our steadfast opposition to the military occupation of Afghanistan by Britain and America.
This 8 year occupation of one of the worlds most impoverished countries does enormous damage to Britain's international reputation. The Afghans have made it repeatedly clear they do not want us to be there.
In recent days two opinion polls - one by the Independent, the other by Channel 4 News - have shown around 2/3rds of the British population no longer support the occupation and want to see British troops withdrawn. This shows quite conclusively that the scaremongering argument put forward by Gordon Brown that withdrawal would mean the Taliban reactionaries would sweep back to power has not had the persuasive impact he thought it would. Instead people believe our military repression of 33m people to be senseless and unsupportable. We continue to occupy a country that is no threat to our security and we do so against the express wishes of the Afghan people. Thousands of innocent Afghan civilians continue to die and British troops are blown to smithereens day after day in a conflict which appears to have no end.
The re-election of the utterly corrupt and vile President Hamad Karzai represents a huge blow to Gordon Brown. The Afghan people utterly despise Karzai and see him as a stooge of their US oppressors. He is utterly corrupt and his vicious administration does not in any case govern Afghanistan at all. Instead local warlords have been left in charge by the US and their record is so dreadful that millions now support the various insurgencies like the Taliban because they are fighting back against those who occupy and destroy their country on the one hand and the vicious murderers and war criminals who govern provinces like Helamand at a local level.
Saturday's demonstration called by Stop the War Scotland, Scottish CND and the Scottish Afghan Society assembles at East Market Street at 10.30am.