ITS TIME FOR EQUAL MARRIAGE

I am proud to be part of this wonderful video celebrating today's launch of the 'It's Time for Equal marriage' campaign
See
http://www.youtube.com/watch?v=_p6FLflRYYE&feature=youtu.be
Posted by Colin at 22:56 No comments:


I don’t know how anyone familiar with Robert Burns’ life and work can argue he would vote NO in the Referendum so I suppose it is a tribute to his continuing potency that they even try.


There can be no doubt Burns was a man exercised by injustice and oppression as well as a love of his country. As an internationalist he engaged fully in the world around him. So Scotland’s current dilemma, where our social democratic values are repeatedly thwarted by Governments we did not elected would undoubtedly have compelled him to put pen to paper.


He reminds us in his poem ‘A parcel of rogues in a nation’ why the 1707 Act of Union was signed – to bail out a financial elite who had squandered the nations assets on reckless and greedy misadventure – and why it was so unpopular with the masses who suffered such appalling economic, social and political ills as a consequence. Enraged at the ‘treachery’ of the Act and furious, not with ‘the English’, but with the emergent mercantile classes in Scotland who drew up its provisions he condemned them as ‘…a coward few….hireling traitors….bought and sold for English gold’.


And as a supporter of the United Scotsmen as well as the French and American revolutions Burns’ democratic sensibilities – dangerous to openly advocate and inspired by Thomas Muir and Thomas Paine - ooze out of every poem he wrote. Every audacious word decries those complacent, reactionary, Scots who took privileges for granted and treated their fellow countrymen and women with complete contempt and meted out severe punishment to any who challenged their authority, as Muir found to his cost.


There can be no doubt Robert Burns supported the Scottish Independence cause and as an activist in his own time no doubt he would also be a prominent participant in the Yes campaign today.
Posted by Colin at 19:28 No comments: 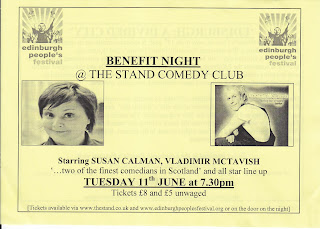 http://www.spreaker.com/user/michaelgreenwell/scotindypod_25_colin_fox
Posted by Colin at 15:33 No comments:

The cross party alliance for Independence ’Yes Scotland’ was launched one year ago. And if the debate over this past year is any guide Independence is clearly the progressive option for Scotland on September 18th 2014. That message was delivered by ‘Yes Scotland’ Chief Executive Blair Jenkins this week as he announced 372,000 people have now signed the ‘Declaration for Independence’. The target, of one million signatures by this time next year, is well on schedule.


Whilst the Yes campaign has sought to highlight the possibilities to advance Scotland’s social democratic values and aspirations the No side has offered a diet of unremitting negativity and doom-mongering.


Be that as it may. The lefts case for Independence is that the opportunity to break with the British state, its Westminster Parliament, its Whitehall mandarins, its City of London capitalists, its Bank of England financiers and its South East England political exclusivity would undoubtedly benefit the Scottish working class.


Socialists here make a clear case for Scottish Independence based on extending the unmistakeable social democratic values held by the majority of people who live here. These values are constantly subverted by a political, economic and social elite we can neither influence nor change.


Let me example that value system for those who may not fully appreciate the differences North and South of the Border.


Scotland voted for free NHS prescriptions, having already voted for free elderly care and free education. Scots by majority overwhelmingly support public ownership of essential public services as oppose to privatisation. Consequently Scotland does not suffer the same levels of privatisation of our NHS or other public services as England. Scotland views the ‘bedroom tax’ with same disgust we had for the Poll tax and the same sense it was being foisted on us against our will. Scotland by a sizeable majority opposes Trident nuclear weapons, based as they are on the Clyde. Scotland has been almost a ‘Tory free zone’ for the past 20 years with just one Tory MP here out of 52.


Moreover the political battleground is fought out between Labour and a party to their left, the SNP. This has been the case for decades. Scots oppose the monarchy in far greater proportions than anywhere else in the UK.   Scots by majority oppose the ongoing occupation of Afghanistan as they opposed the invasion of Iraq. Scots do not support the unregulated, laissez-faire, free market neo-liberal economic system to anywhere near the same degree as South East England.


Yet the fact is, and has been for a considerable time now, these values are constantly subverted by a political system and constitutional arrangement we no longer support.


The 2011 Scottish Parliament elections saw a further move away from Labour, this move was not to the right as in England, but to the left.


And here we encounter some confusion from opponents of Independence unable to distinguish this move towards greater social democratic values in a party, the SNP, which is clearly neo-liberal on economic matters. Ironically it seems to have taken the Tory commentator and author David Torrance to point out the SNP’s essential character. Highlighting the deepening crisis in the Tory Party in Scotland he makes the telling point that the SNP’s right of centre economic policy –favouring a ‘business friendly Scotland with low Corporation Tax levels’ etc – leaves the Tories with no room to establish this as their own, unique terrain. But whilst the SNP are certainly right of centre on economic policy [although no more so than New Labour] they are to the left on social policy.


The ‘Yes Scotland’ coalition is an alliance between social democrats and socialists, between ‘business friendly’ figures and the Greens, between left, right and centre. It sees its job not to develop policy but rather to maximise support for Independence. Clearly this is often easier said than done but it concludes that the type of Independence Scotland opts for will be determined by the outcome of the 2016 Scottish General Elections [following the Yes vote in 2014 and a period of negotiations between Holyrood and Westminster on the transitional arrangements for the hand over of power].


‘Yes Scotland’ is influenced heavily by the SNP, its biggest and most powerful constituent part, but the SSP and the Greens continue to play an important part both in influencing strategy and in posing the type of Independent Scotland we each prefer.


The Scottish Socialist Party is clear that Independence represents both a step away from neo-liberal economics, corporate control and British state warmongering and a step towards a more social democratic Scotland where we can more effectively raise socialist ideas.


We have many differences of course with Alex Salmond. Not the least a view that victory in the 2014 Referendum will best be achieved by stressing the transformational character of Independence rather than maintaining so many of the present arrangements such as keeping the Queen, keeping the pound, maintaining corporate dominance of our economy and remaining within NATO.


Nonetheless we are convinced that Scotland’s social democratic values are more likely to be advanced within an Independent settlement where the people of Scotland can more readily shape our country. Remaining part of the UK means the Scottish working class will suffer worsening economic conditions – the worst recession in 80 years - worsening social conditions – amid the 4th most unequal society in the industrialised world – worsening political conditions as we continue to endure more Tory Governments we did not elect and cannot abide – and further diminution of our distinct cultural identity, institutions and values.


Independence offers the Scottish working class a different choice, of a new social order and a far more progressive future. That’s why the Scottish Socialist Party supports it and advocates an Independent socialist Scotland that is in due course a modern democratic republic.

This article was originally written for ad published by The Morning Star [31/5/13]
Posted by Colin at 14:07 No comments: