When the first set of transfers took place it was clear Alistair Moffat had secured a substantial win and I offered him my congratulations.

As the Left candidate in the election I was very pleased to gain such a substantial share of the vote. Almost one in five students at St Andrews gave us their first preference vote and opted for our programme of;
-Opposition to fees and the increasing indebtedness of students Education is a right not a privilege was our slogan [Borrowed from Red Clydeside legend John Maclean]
-For fairer rents and better student accommodation at St Andrews
-Opposition to cuts in University funding and facilities and indeed all public services
-Support for the Universities Wind Farm at Kenly which is under attack
-And support for the ethical investment of University finances

I would like to thank my campaign team - the Left Society at St Andrews - James, Amanda, Callum, Patrick and Ben who did a power of work over the past 10 days and ran a first class campaign. They were always enthusiastic, highly principled, always polite, exceptionally clever and tireless in their herculean efforts in the face of considerable odds.
We did very well to come such a close third, just 100 votes behind the Tory candidate Lord Michael Forsyth in what is after all a socially conservative place. Lets not forget St Andrews is now the most expensive University at which to study in the whole of the UK given the fees, price of accommodation and the cost of living in this small Fife town. That has an inevitable impacts on social background and outlook of those students who can afford to go there. It's not that long since Prince Willie left here after all!

The 'Fox For Rector' campaign can be and are understandably proud of the efforts we put in and the way we raised 'the scarlet standard high' amid 8,000 students at St Andrews and I'm sure the Left Society will continue to do so.
Posted by Colin at 18:58 No comments:

I am proud and honoured to have been nominated by students at St Andrews University this week for the position of Rector.
The post is elected by a secret ballot of all 8,000 students and the Rector's job is to champion students interests on the University Court, its governing body. The successful candidate serves a three year term and chairs the Court meetings.
I stood for the position 3 years ago and we polled a very creditable 28% of the vote, coming second to Kevin Dunnion the Information Commissioner and current Rector.
The students promoting my candidacy have again presented a programme which restates our shared central belief that access to the best possible education should be a right afforded to everyone rather than a privilege reserved for those who can afford it. This principle is particularly important in this election as St Andrews has one of the lowest levels of admissions from the state sector.
The University authorities recently decided to impose the maximum possible £9,000 fee on students from the rest of Britain studying there. When you add in the cost of accommodation and other living expenses it becomes the dearest place in the country to study. That cannot be a good label to wear.
These are serious times for students. Who can forget the anger expressed by hundreds of thousands this time last year when the tuition fees introduced by New Labour were further increased by the CON/DEM coalition. The escalating cost of living, the enormous indebtedness and the immoral package of public sector cuts has inevitably been felt at St Andrews. The University has made cuts to accommodation arrangements and library improvements, all of which makes life harder still for students.
I do support the sustainable energy programme the University has embarked upon and it's ground breaking ethical investment portfolio.
But serious times demand serious candidates and I have pledged to be a 'hands on' working Rector.
I see the role as being very important indeed in these difficult times and I'm committed to standing up for students and improving the quality of life they experience in their time at St Andrews. I have pledged to hold regular surgeries where students can come and raise their concerns directly with me. I also plan to produce a regular bulletin/report explaining the issues developing and the decisions I have taken on their behalf. These are commitments I made [and kept] to my constituents when I was an MSP between 2003-07.
The Rector election takes place online between Wednesday and Friday of this week. The result is declared on Friday evening. There are five candidates standing and I am very much looking forward to the contest.
Posted by Colin at 21:09 No comments:

Eating Away At Your Pension Rights 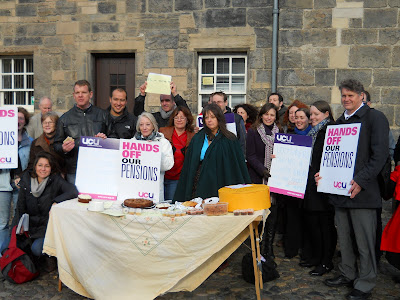 I was up in St Andrews today meeting students and staff. Whilst there I was invited to come along and enjoy some cake in a lunchtime protest with a difference. Staff from the UCU [University College Union] were protesting at management plans to eat away at their pension rights.
The University pension fund is made up of contributions from staff and employers. Management are demanding that lecturers pay in more in contributions, work longer before receiving their pension and get less money when they do eventually retire. Its a triple whammy.
The union estimates staff could lose up to £100,000 over the course of an average 20 year retirement through the new proposals compared to present arrangements. To add insult to injury the University hierarchy - Principals and Vice Chancellors etc - would not suffer any such diminution in their pensions. So the overall share of the pension 'cake' [get it] for staff is being reduced, which Marie Antoinette's remains unaffected. 'Let them eat cake' indeed!
Posted by Colin at 22:42 No comments:

This letter appeared in yesterday's Scotsman and Herald

OFGEM's revelation that the big 6 energy firms have increased their profits 8 fold since June will undoubtedly make millions of irate customers even more furious. After all these profits come as the Government tells us there are now one million Scots households living in fuel poverty,i.e. unable to afford the £1,345 now demanded of them for gas and electricity.
And the reasons for their plight are plain to see. Energy bills have doubled in the past 5 years, whilst wages, benefits and pensions have not.
The combined bill for gas and electricity now also includes 20% VAT which means we are paying some of the highest energy prices in the world. And all this at a time when living standards are plummeting.
As readers of this newspaper are well aware the Scottish Socialist Party has been campaigning on this issue for many months. Like millions of Scots we believe fuel poverty is an affront to our society. People are going without the heating they need with bitterly cold weather round the corner. Mothers are foregoing evening meals in order to provide for their children instead. Cold related deaths are set to soar.
We demand the Government acts to cap these bills, that anyone paying more than 9.95% of their income should receive an immediate winter fuel allowance to prevent them toppling into fuel poverty.

The Government must also reverse the cuts made at both Westminster and Holyrood to programmes designed to support people in these difficult times. Chancellor George Osborne may wish to reflect on the wisdom of his decision to cut the winter fuel allowance paid to pensioners. And Alex Salmond should likewise reverse his decision to withdraw help to those trying to install more efficient heating systems and improved household insulation.
The timing of the SNP Government's decision earlier this year to abandon the promise it made in 2007 to eradicate fuel poverty in Scotland by 2015 plainly couldn't be worse. Yet if this objective is ever to be delivered then the industry clearly must be returned to public hands, only then will the provision of essential heating and lighting to everyone again be the uppermost objective, ahead of multinational corporate profiteering.

Me and Tony Benn in Glasgow Again 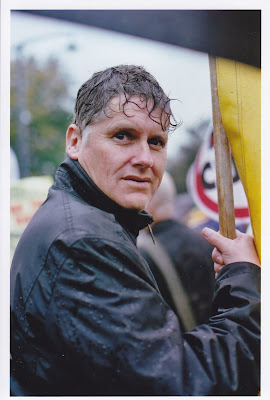 I've been on wetter demonstrations, I assured SSP colleagues last Saturday. But actually I don't think I have.
The STUC march through Glasgow attracted 15,000 people, the organisers claimed, in protest at the cuts to public sector jobs and
services being carried out by the CON DEM Government. If it had been dry I'm
sure the turnout would have easily been double the size. 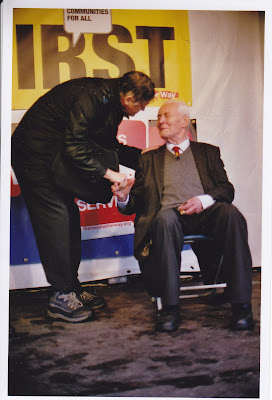 Given the atrocious weather the organisers rightly curtailed the long list
of advertised speakers. In the end Tony Benn was the only one. And
it's fair to say he was listened to avidly by the soaked assembly who hung
on his every word and would have happily listened to him for much longer.
I spoke to him briefly on stage and expressed my continuing admiration for him
and all he has one for our great movement.
I first met Tony 30 years ago as a young socialist when he was running
for the Deputy Leader of the Labour Party against Denis Healey. He was
speaking at a meeting in Glasgow University one Sunday morning and I travelled
in from Motherwell to hear him. He is one of the main reasons I got involved
in left wing political activity. I have kept in touch with him ever since.
Now in his late 80's and increasingly frail he remains one of my heroes.
Posted by Colin at 11:57 No comments: