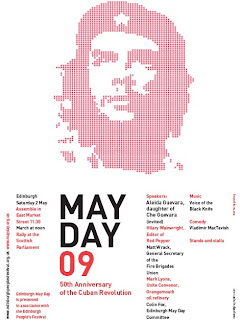 This years Edinburgh May Day march marks the 50th anniversary of the Cuban revolution.
As President of the Edinburgh May Day Committee I am delighted to announce that Che Guevara's daughter Aleida will be coming over from Havana to lead the parade. Joining Aleida on the speakers' podium will be Hilary Wainright, the editor of Red Pepper magazine, Matt Wrack, General Secretary of the Fire Brigades union, and Mark Lyon the TGWU-Unite union convenor at Grangemouth oil refinery.
The fun starts at noon on Sat 2nd May when the march leaves Market Street and heads towards the Scottish Parliament for a rally. We will also be treated to the inimitable comic humour of Vladimir McTavish and the music of Voice of the Black Knife.
It promises to be another wonderful occasion, the highlight of the socialist year in Edinburgh.
Further details and updates can be found at the Edinburgh People's Festival website www.edinburghpeoplesfestival.org

Motherwell is won for socialism and the SSP

This weeks Motherwell Times newspaper reports a rare election victory for the Scottish Socialist Party.
Third year pupils at the town's Our Lady's High School - coincidentally my own 'Alma Mater'- held a mock election involving all 5 of Scotland's political parties and the SSP team won.
The paper's report also carries a lovely colour photograph of Daniel McDermott, Louise Murray, Luke McMahon and Lucy McCarron holding an SSP banner reading 'Make Capitalism History'.
Readers of this blog will recall that I visited the school on February 24th and received a very warm welcome.
The school have attributed the SSP's success to my visit but I like to think it is much more significant than that, rather it is a sign of these historic times and of the victories to come for the Scottish Socialist Party.
Posted by Colin at 15:29 No comments:

Scottish Socialist Party Press Release
Scottish Socialist Party national spokesman Colin Fox will accuse the Government of 'grievously underestimating' the impact of the worsening economic crisis on the Lothians. He will tell a public meeting in Dalkeith tomorrow night [Wed 11th March] that Alastair Darling and Gordon Brown have been 'miserably wide of the mark on all their economic pronouncements'. Sharing the platform with him at the Dalkeith Arts Centre will be Mr Raphie de Santos, a former financial strategist with Goldman Sachs.
'Gordon Brown famously predicted there would be 'no return to boom and bust' said Mr Fox, adding 'This time last year Alastair Darling was insisting 'there would be no recession in Britain' despite the mountain of evidence to the contrary. Rather than accepting they were badly mistaken, both men continued to forecast that 'Britain would be largely unaffected by the global downturn'. The International Monetary Fund [IMF] now believes Britain will suffer a deeper recession than any other industrialised nation.
Mr Brown and Mr Darling have grievously underestimated the depth of this economic crisis they have gotten us into. Their miserable economic pronouncements have been well wide of the mark for two years now. 'The Royal Bank of Scotland suggests that 20,000 jobs will have to go as part of its rescue package of which 10,000 are likely to be in the Lothians. Lloyds TSB intends to 'rationalise' Bank of Scotland branches throughout the country and close down its Scottish Widow's fund management organisation, SWIP, merging its business into its London operation, 'Insight'. That could mean another 5,000 jobs go here in the Lothians which will in turn further depress the local economy.
Mr Fox believes 'The Government should put money into protecting jobs and services, into increasing the national minimum wage, providing every child with a full time nursery place, building 100,000 Council houses and raising the state pension to 2/3rds of the average wage. These types of measures would improve the economy and assist those suffering most from this recession.'
Mr de Santos agrees 'All the financial and economic indicators show that Britain is now in the midst of the longest lasting and deepest recession since the 1930's. The Government have been way off the mark in every economic estimate it has made these past 18months. It is clear that capitalism is now in a severe worldwide crisis. Tens of millions of jobs have been lost already and we have not yet reached the bottom. I expect unemployment, bankruptcies and house repossessions to soar throughout this year. The Lothians will be particularly badly affected. Job losses, in the financial sector, will make a bad situation worse here.'
Posted by Colin at 06:49 No comments:

Thirteen people at Prisme Packaging in Dundee lost their jobs on Wednesday the latest victims of an increasingly brutal recession. Their firm, which manufactures cardboard boxes, lost its biggest customer on Monday and has subsequently gone bust.
But this non union workforce found to their cost that they are more vulnerable with the treatment they received as the firms owners announced they were all sacked with immediate effect and would not receive any redundancy pay or even their wages for March.
They were each handed a letter telling them they would not get a penny piece even though some of them had worked there for 14 years and were legally entitled to severance pay as the firm had gone bust. Their response was immediate and unanimous, they occupied the factory and took control of the assets.
Since I happened to be up in Dundee on Thursday, campaigning for SSP candidate Angela Gorrie in next weeks Maryfield by election, I went along to offer my support to the occupation.
I was delighted to meet Matthew, Christine, David and the others and find them in such good spirits considering what had happened to them. I recounted my experience in the Caterpillar occupation of 1988 and pledged support from the SSP in helping them save their jobs or at least secure the redundancy monies they are entitled to.
Posted by Colin at 11:32 1 comment: 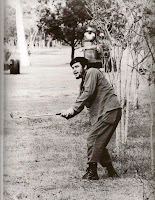 [I recently came across this picture of Che Guevara playing golf and thought it might illustrate how his work is being carried on by a new generation at ‘the home of golf’]
Students at St Andrews University were in the headlines last week for occupying their College Halls in support of the Gaza Palestinians and in particular against the University’s links with Israeli defence contractors. Last Wednesday as their week long occupation drew to a close they asked me to come up and address them. Many of the 200 or so student protesters had helped organise my election campaign to become Rector of the University last October. These are my remarks to them: ‘I am very proud indeed to be back here at St Andrews tonight to stand shoulder to shoulder with you at the end of this remarkable occupation. I am proud to see so many of the students who led my campaign for Rector in October involved in furthering the cause of the Palestinian people.
I am sure Kevin Dunion [the successful Rector candidate] is delighted you have taken this action and demonstrated the strength of feeling on campus. [ Kevin Dunion was, unbeknown to me, sitting in the meeting as I spoke! Much amusement this remark made.]
I wish to congratulate you all on behalf of the people of Scotland and on behalf of the majority of the peoples of the world who like you share the view that another terrible injustice has befallen the people of Gaza in recent weeks. You have done both them and yourselves immense credit by the principled and dignified way you have conducted your protest.
You are a credit to the people who have gone before you at this learned institution and the spirit of learning which this place exists to promote. You have learned that it is right to stand up to tyranny and abuse. It is right to resist injustice. It is right to rebel against exploitation and misery. Read Shelley, read Oscar Wilde, read Malcolm X and you will know you are right one thousand times over in your actions this week.
In my experience over 30 years as an active participant in the international class struggle your actions do affect change, you give huge encouragement to the Palestinian people by this action. News of your protest will have reached out across the globe. You have given great encouragement to hundreds of millions of people throughout the world who also support the Palestinian cause.
Furthermore your action will have severely irked those who wish you hadn’t done it; the UK Government, the US Government and of course the warmongering Israeli propaganda machine.
They would have rather you hadn’t had this occupation. They would rather you had stayed in the bar drinking and 'minded your own business' or stayed in your halls smoking a joint and getting stoned paying no mind to these 'international affairs'. In truth of course they would have far rather you were protesting on their side, in favour of BAe’s links to the Israeli military or in favour of the injustices meted out to the people of Gaza and the West Bank.
I see the Palestinians in 2009 as the black South Africans of the 1950’s, 60’s, 70’s and 80’s. They are facing the barrel of a gun and facing overwhelming military intimidation when they seek their basic democratic and human rights.
The struggle for justice for the Palestinians today is every bit as important as the anti Apartheid campaign of the 1960's -80's. The treatment of Palestinians is no less brutal that that meted out to the black majority in South Africa. The injustice is likewise rife, the military odds stacked against them virtually insurmountable. Yet the international support is as it was for Nelson Mandela and the ANC. And lets not forget that despite overwhelming odds they won.
And so will the Palestinians. Your occupation this week has played its small part in bringing the day the Palestinians achieve these rights that bit closer.
I salute you, you should be proud of yourselves and each other. Lets walk out of here together, united and proud. Our heads held high. Thank you.’
Posted by Colin at 20:23 No comments:

My thanks to the pupils and staff at my old school, Our Lady’s High in Motherwell for the warm welcome they gave me last Tuesday when I visited them.
It was great fun to see round the old place again. When I was there it was the biggest school in Scotland and newly built.
I thoroughly enjoyed meeting the 3rd, 4th, 5th and 6th year pupils taking Modern Studies and Politics and I particularly enjoyed answering all their questions.
Marianne McManus the Dept Head has asked me to come back every year and that’s something I’d love to do.
Posted by Colin at 20:21 No comments: