RADICAL INDEPENDENCE -  AN IDEA WHOSE TIME HAS COME

I was looking forward to the Radical Independence Conference in Glasgow yesterday and I was not disappointed. Conference organisers billed the event as ‘a one day conference to discuss Independence and the way forward for Scotland’ and they are to be congratulated on presenting a stimulating event, in comfortable surroundings with modern facilities, conducive to thinking, discussing and learning from others. Moreover with delegate passes priced at just £4 [unwaged] they also succeeded in keeping the event within everyone’s reach.

Inevitably with several important and attractive sessions and 800 people attending throughout the course of the day the conference was tightly timetabled and often too unwieldy to decide very much, some ‘workshops’ had 300 people in them. But rightly the events emphasis was on beginning the process of deliberation over the many important issues in front of the entire Independence movement in Scotland.

The thing that struck me most was that just as the Independence movement which covers a multitude of philosophies we too had a wide range with socialists, greens, trades unionists, social democrats, nationalists, internationalists, feminists and single issue campaigners all content to describe themselves as ‘radicals’. Equally we learned to accept, as more than one person said in the 10 workshops, there are presumably radicals who support the union out there too! The word ‘radical’ in itself means almost nothing if we are honest, its like the phrase ‘the people’.

Nonetheless the 800 people who gathered yesterday will have been greatly encouraged by what we have in common, and no one put this better than my ‘Yes Scotland’ Advisory Board colleague Patrick Harvie who said, inter alia, that ‘people who like the status quo will vote no, what we need to win a majority for Independence is a transformational agenda with more democracy, more redistribution of wealth, more public ownership and more co-operation’. And this unanimity was echoed in the packed workshops. I attended one on the case for a Scottish republic. Here each of the arguments for monarchy were abjectly dismantled and ridiculed. Conference accepted there was nothing democratic, progressive or modern about the principle of a hereditary Head of State. And whilst we were all able to agree that republics are not, in and of themselves radical, there can be no doubt that achieving a modern democratic republic for Scotland would be both a huge blow for the British ruling class and a seismic advance for democracy.

I was able to mention how the burgeoning ‘Yes Scotland’ movement has advanced in recent weeks during the session on strategies for Independence. I tried to infuse it with the sense that we are part of a powerful mass movement which compares with the anti-poll tax campaign of 25years ago. And there was a widespread acceptance that the place for the Radical Independence Campaign is inside the ‘Yes Scotland’ coalition helping to ensure our transformational agenda has maximum impact and influence. This is certainly the role myself, Patrick Harvie, Pat Kane, Elaine C Smith and others advance on its Advisory Board. Clearly the addition of thousands of others would be pivotal in shaping the future strategies of the Independence coalition.

In drawing the day long conference to a close Robin McAlpine of the Jimmy Reid Foundation stressed how powerful and persuasive ideas themselves are in the world today saying ‘we [the RIC] are above all an idea and we need to turn that into a story the Scottish people can understand and support’. How true. For here were echoes of Karl Marx’s wise words. ‘Philosophers’ he reminded us 150 years ago, ‘philosophers have merely interpreted the world, the point however is to change it’. For me the most refreshing aspect of yesterdays conference was that these powerful and persuasive ideas, so powerful and challenging, now have greater semblance to gain traction among the Scottish people in 2014.
Posted by Colin at 17:28 No comments: 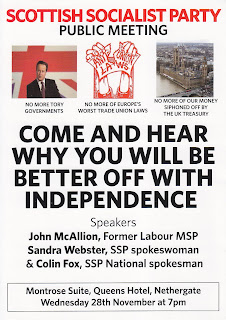 
‘From Scotland to Spain, the struggle is the same’ chanted the crowd over and over as it weaved its way through Edinburgh city centre in the early evening darkness. ‘From Scotland to Greece, no justice no peace’ they added.
Around 600 of us marched in support of workers in 23 other European countries who had themselves been protesting against Governments austerity cuts.

The Edinburgh city centre traffic snarled up behind us as we snaked slowly along Princes Street.

And for SSP activists carrying our party colours it was remarkable to be on a demonstration where English was not the main language spoken. These young people mainly from Spain chanted mainly in Spanish. They work here in Edinburgh albeit in low paid, casual, temporary and largely part time work because they had to leave Spain to get work and they consider themselves to be the lucky ones because compared to their compatriots back home, they reasoned, they were far better off.

So delighted were these young workers to see Scottish Socialist Party members standing shoulder to shoulder amongst them that several asked to have their pictures taken next to our banner to send, via email, to their folks back home.
‘The workers united will never be defeated’ translates beautifully into Spanish, Greek, Portuguese, Italian, French…….

Scottish Socialist Party leader Colin Fox has called on the Government to prosecute any of the big six energy companies found guilty of manipulating gas prices by the ongoing OFGEM/Financial Services Authority enquiry.

Speaking after Energy Minister Ed Davey announced an enquiry into allegations of manipulation of wholesale gas prices in a market worth £300bn Mr Fox told us
‘With one in three families in Scotland shivering in fuel poverty and unable to afford their gas and electricity bills – bills which have doubled in the past 5 years - these allegations [of price fixing] will be met with widespread outrage.
‘Clearly we have to await the outcome of the OFGEM/FSA investigations but if these allegations prove to be true there will be uproar, and not least from those whose voice this debate has so far lacked, millions of working class families suffering the daily indignity of fuel poverty.
‘I call on David Cameron and Alex Salmond to make the abolition of fuel poverty their number one priority this winter. The Warm Home and Energy Conservation Act of 2000 promised every household the legal right to affordable fuel and yet that promise is further away than ever.
‘Millions of people already believe these bills are too high and that the energy companies are profiteering. Moreover the winter fuel allowance is utterly inadequate and so is Government investment in insulation and energy saving schemes. But above all the provision of this vital utility needs to be returned to the public sector to end multinational energy companies making billions in profits whilst driving millions and millions of families in Britain into fuel poverty and an early grave.’
ENDS

Leith Public Meeting On The SSP's Case For Independence